Gold’s advance has slowed in 2012 compared to recent years, and the metal hasn’t traded very well since September of 2011.  Still, this morning CNBC is running results from a poll showing that retail investors love the metal.  While many professionals will tend to take such a poll as a contrarian indicator, something fundamental may be beginning to change for gold as well.  A major driver of gold’s advance has been the increase in the monetary base because of QE.  If a QE3 doesn’t take place then this increase will continue to slow.  The increase in the base has already slowed considerably in recent months, as shown below.  Of course, gold was strong 2002-2003 despite moderate base money growth, so just because this growth slows doesn’t necessarily mean the end for gold. 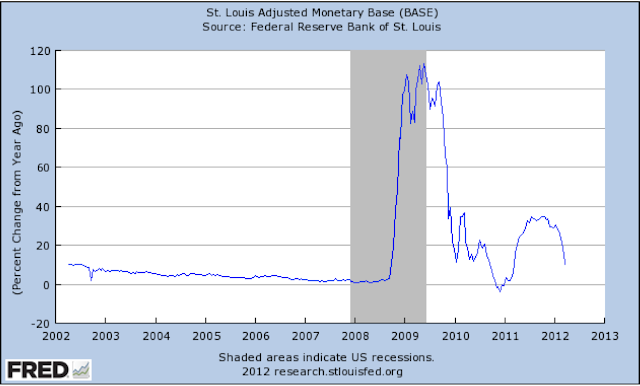