Facebook shareholders have had a wild ride in the hours since the company reported earnings yesterday afternoon.  The company posted gaudy 60% revenue growth year over year, bringing 3Q revenue to $2 B from $1.26 B in 2012.  That’s truly spectacular growth on a percentage basis, but relative to the company’s market cap, it’s a little ho-hum.  $FB still trades at a huge premium to revenue implying that the market is looking for much more growth to come.  Facebook isn’t the only internet company that is pricing in seemingly limitless growth, but how likely is that growth to materialize?

The interesting thing about ad supported internet models is that they are not pioneering a new market so much as rapidly taking share in an existing one.  The global advertising market is well defined, so the real question is how much share is internet spending going to take?  Global ad spend is forecast to hit $503 B in 2013.  Internet ad spend currently represents 18.3% of that pie, or $92 B.  By comparison, the ad supported internet businesses listed in the US have a combined market cap north of $590 B, which is greater than the total advertising market.

If you assume that internet ad revenue comes with a 30% operating margin, and put a 10x EBIT multiple on that figure, back of the envelope math implies that the current portion of internet ad spend is worth about $276 B in market cap.  Using the same assumptions and working backwards, the $590 B total market cap of US listed internet companies implies that the stocks are discounting ~$200 B in annual revenue for the industry, meaning that current market values suggest that these companies will capture about 38% of global total ad spending.  That’s about the same share that’s currently spent on TV.  Quick note there: the top six global media companies (Disney, Fox, etc) have a combined market cap of ~$460 B, although they also have customers that pay money directly for their content, so not a totally apples to apples comparison. 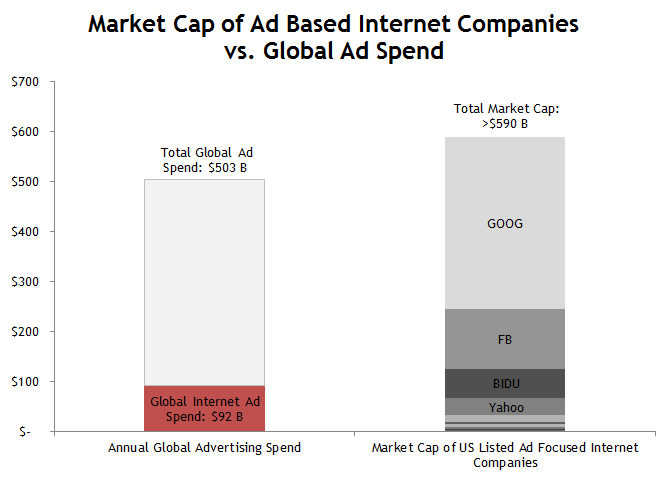