There are a few different varieties of stock market sell-offs: 3%, 5%, 10%, 20% and 30%+.  Three percent declines, like we’ve seen over the last few days, occur very frequently and are a healthy part of a bull market.  Five and ten percent declines are also typical of bull markets–even in a bull market, a 10% decline happens about once every 20 months. A 20% decline usually marks the line of a bear market, which can easily spill into the 30%+ decline range.

It’s impossible to know whether the current 3% decline will become a larger decline, but it’s not too difficult to do the arithmetic to see how far the market would fall if it hypothetically dropped by any of these percentages (the math is below).

Since all declines eventually end when prices are reached that are attractive to buyers, I also included the P/E multiple that the S&P 500 would be selling for at those levels.  I used the forward analyst estimate of $122 in earnings for 2014.  This is generous to the bulls.

I would argue that most value investors like to earn at least an 8% return on investment, which is roughly equivalent to paying about 12.5x earnings for a company.  That level would be reached somewhere between a 10% and 20% decline from the peak.  If value investors are on the sidelines until then, it means that momentum focused investors need to carry the rally to avoid a steep decline. Momentum investors can be bulls one day and bears the next though, so if the bull trend starts to be compromised, there’s a greater chance of a large decline today than at any other time in this bull market. 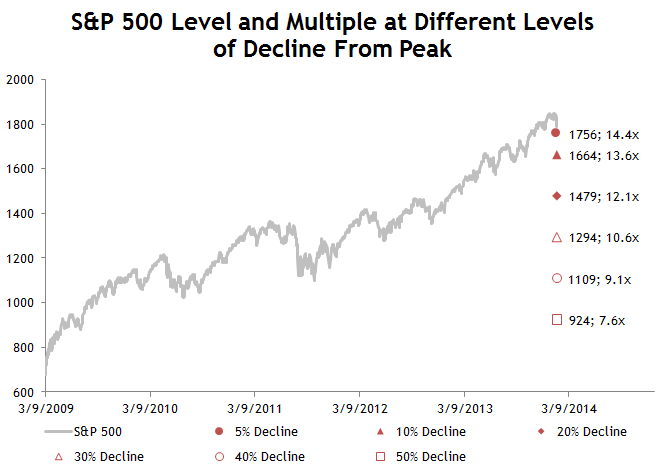