The last time that the market had a 10% pullback was in June 2012, meaning that it’s been over 14 months since our last big draw down.  That makes this the longest stretch since 2009 without a 10% pullback.  This could be cause for concern, but in order to put our current bull run into perspective against other mega-bulls, below is some data from the 1950s, 60s, 80s and 90s bull markets.

By comparison, we’ve had four 10% drawdowns since 2009, with rallies averaging 11 months in between.  Although only 7 of the 16 rallies in the mega-bulls made it longer than our current rally, 12 out of 16 saw larger gains than our current 35%.  If this turns out to be a secular bull market like eras past, then it’s not inconceivable that this rally could go even longer without pausing. 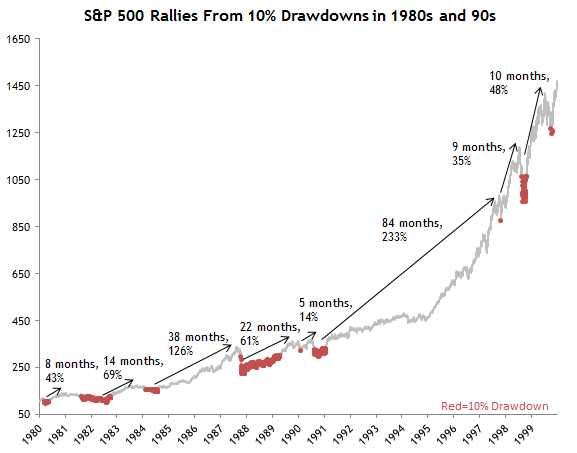 5 thoughts on “How Often is There a 10% Pullback in a Bull Market?”