Chipotle reported strong same store sales growth last night, which has the stock higher by 13% today.  Each Chipotle restaurant is now generating $2.3 million in sales.  Below is a look at how that compares to other quick service restaurants.*

I was actually pretty surprised to see that Chick-fil-A is #1 on this list, especially because the stores are closed on Sundays.  Still, there’s a steep drop off after Chick-fil-A.  McDonald’s does $2.6 million in sales per location, which is just 12.7% more than Chipotle’s current number.  If Chipotle has another year of growth like this, it could end up surpassing McDonald’s next year.  That would be a pretty spectacular feat considering that Chipotle doesn’t serve breakfast (yet).

Chipotle’s market cap is now $20 Billion, so it’s pricing in a hefty amount of growth.  Assuming that it matches McDonald’s $2.6 million in sales per location, achieves a 25% EBITDA margin (an increase from 20% currently), and we apply a 12x EBITDA multiple, each store would be worth $7.8 million.  The $20 billion market cap therefore implies about 2,600 locations.  On the earnings call last night, the company said that it could probably have more than 4,000 locations, but “that number of 4,000 plus restaurants…that’s sort of 15 to 20 years out.”  The company currently has 1681 locations and is adding ~200 pear year.  At that pace it would hit 2600 five years from now. 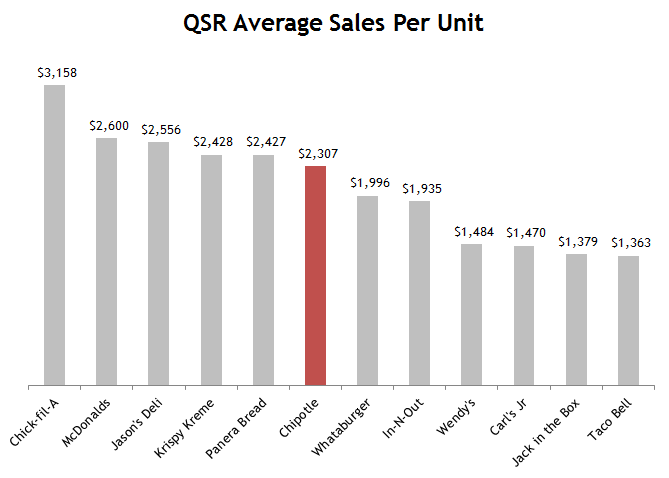