In the ongoing debate over whether or not the market is “cheap” or “expensive,” a favorite argument of the bulls is that equities are still cheap compared to fixed income.  The logic behind the argument is that the forward multiple of the S&P 500 (based on 2014 earnings estimates) is ~14.5x or about 6.9% in terms of earnings yield.  In comparison, the yield on the long bond is currently 3.63%, meaning that equities sell at a “spread” of 327 bps.  The problem with this analysis is that the 30 year bond represents a risk free rate, while equities should have a risk premium baked in.  The analysis below is an attempt to estimate what that risk premium should be relative to assets with similar risk.

True risk has nothing to do with price volatility, it has to do with defaulted cash flow streams.  So, in order to measure the riskiness of equities, we have to come up with a proxy to measure for how much the S&P 500 has missed its “promised” earnings by.

How does that “default” rate compare to fixed income assets?  Based on the default tables published in this Moody’s study (page 14; un-adjusted for withdrawal), below is an estimate of expectations for the cumulative missed coupon payments from differently rated bonds over a 12 year period.

Interpret this table as:  If a basket of bonds were supposed to pay $10 in coupons for 12 years a perfect cohort would pay $120 over that time frame.  Based on the Moody’s default tables, an investor in a basket of Ba bonds would expect to receive about 91.8% of that amount cumulatively over the 12 years. 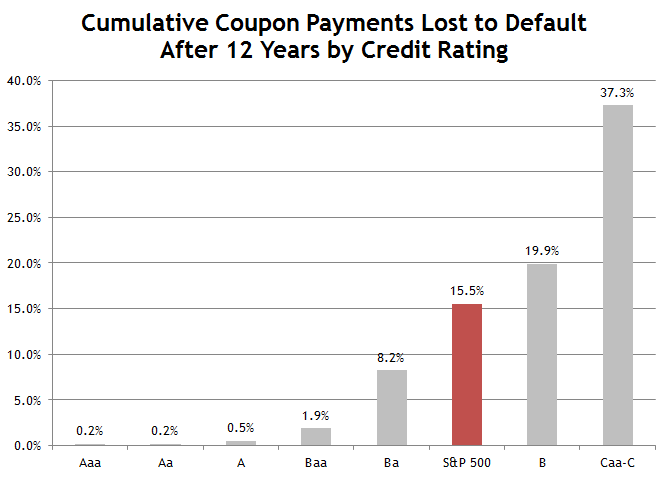 Combining the two charts, the S&P 500 missed the equivalent of 15.5% of its earnings/coupon payments over the course of the previous 12 years relative to a 6.9% “promised” growth rate.  That puts it somewhere in between a group of Ba and B rated bonds in terms of missed cash flows.

The current option adjusted spread on the BB Merrill Lynch benchmark is 310 bps and on the B benchmark it’s 415 bps, which means that the 327 bps spread of the forward earnings yield of the $SPX to the 30 year Treasury Bond is also somewhere in between.  On that basis, factoring in a deserved risk premium, equities aren’t exactly cheap to fixed income, and the “cheapness” or “expensiveness” of equities is more reflective of the absolute value of securities markets in general, especially fixed income.

(Some notes on methodology: I didn’t adjust for any recoveries on defaulted bonds, or factor in how the defaults would affect final portfolio value.  The figures above are based on summing the coupon payment from current bonds in each year.  I would argue that any bias caused by that shortcut may be offset by survivorship bias in the S&P 500.  Also I haven’t time-discounted any cash flow streams for the sake of simplicity.)

One thought on “Are Equities Really Cheap to Fixed Income?”