Commodities have taken a beating for the last couple months, which has accelerated since the start of May.  Oil, quoted as WTI, has cratered from a high of $107 per barrel to a low of just under $92 as of yesterday.  Since the beginning of May, Brent has done a little better than WTI though and so the spread between the two has increased from $13 back to $17 per barrel. 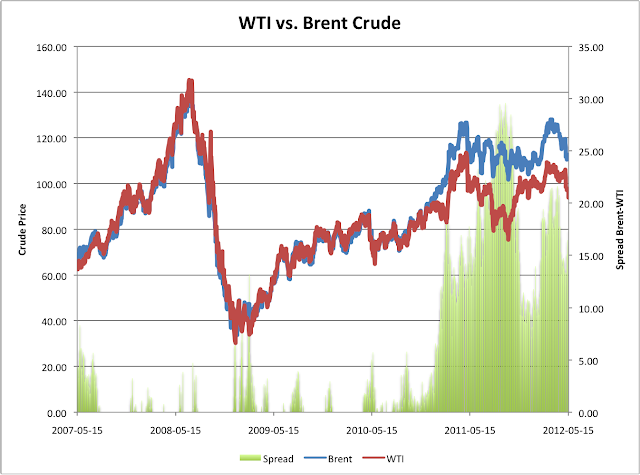 For some perspective, a long term chart of the spread between WTI and Brent is below.  Between this spread and the spread of crude to natural gas, there are some historic anomalies occurring in energy markets currently. 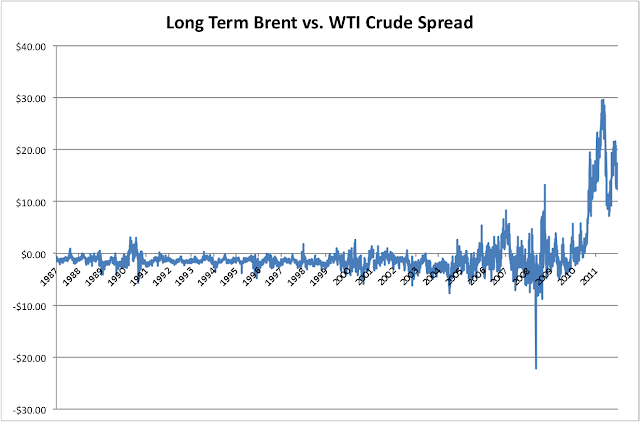 US equity markets were rattled yesterday when a report came out that Greek banks had lost 700m euros worth of deposits on Monday.  It’s a large sum in a single day, but it’s mostly a continuation of a process that has been in the works for some time.  NBG, which is the largest private bank in Greece, has seen its deposits decline by 11.5 billion Euros since 2009.  That’s 16% of its deposit balances. 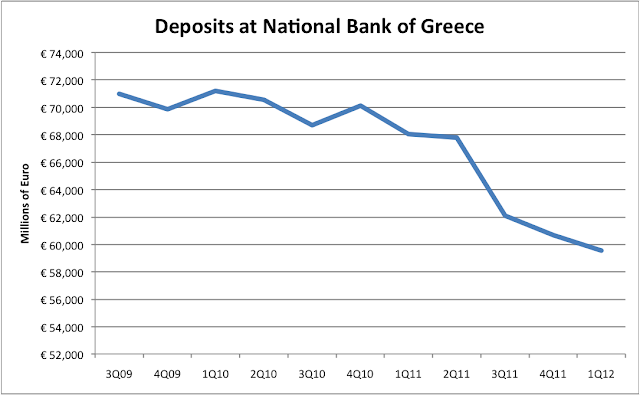 Housing starts were reported this morning at 717k for April on an annualized basis.  It’s still an extremely low level, but for the first time in a long time, it looks like starts could be breaking out of the low level that they have been stuck in since 09. 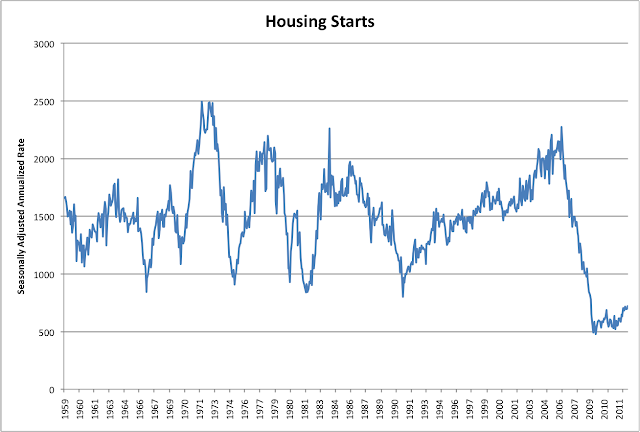 Many investors will use the SPDR ETFs to gain broad exposure to a particular sector, but often they don’t give as much thought to the underlying components of each ETF.  Below is a list of the top 5 holdings of each SPDR sector ETF.  In many cases the top 5 holdings can represent a huge portion of the ETF.  The XLY for instance holds 30% of its portfolio in its top 5 holdings, even though it claims 80 total holdings.  The bottom 5 holdings of the XLY have a combined weight of 0.77%. 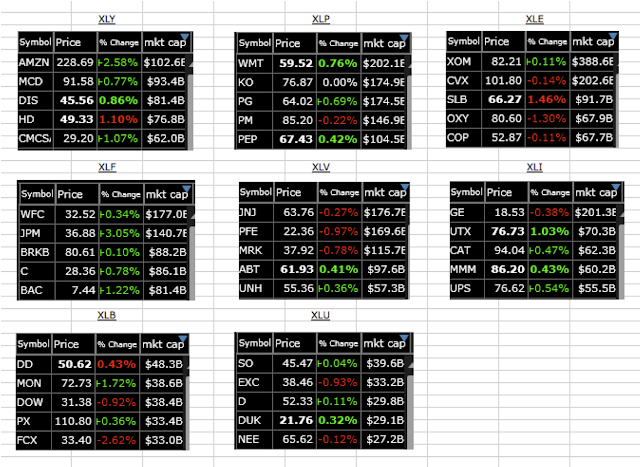 We are also subject to Proposition 65 in California, a law which requires that a specific warning appear on any product sold in California that contains a substance listed by that state as having been found to cause cancer or birth defects in excess of certain levels. If we were required to add warning labels to any of our products or place warnings in certain locations where our products are sold, it is difficult to predict whether, or to what extent, such a warning would have an impact on sales of our products in those locations or elsewhere. While none of our beverage products are currently required to display warnings under this law, we cannot predict whether a component of any of our products might be included in the future.

Are they trying to say that their drinks may cause cancer or birth defects?

Eurozone GDP in Q1 was reported as flat y/y, which was better than expectations.  Below is the list of GDPs of component countries.  Greece GDP is lower by 6% y/y, while Portugal is 2.2% lower and Spain is only down by 0.4%.  For comparison the most that US GDP was down y/y in the financial crisis was ~5%. 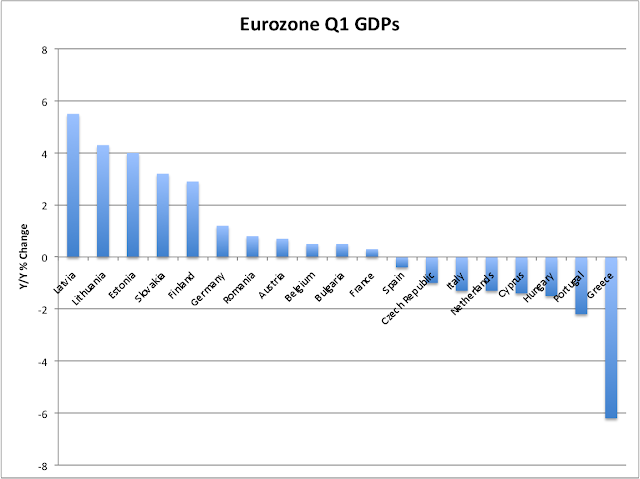 The S&P 500 has closed lower in 8 of the last 11 trading days.  In the 2nd quarter, the S&P has only closed positive 40% of the time, which is quite a losing streak compared to the 1st quarter when the index was higher on 63% of trading days.  Since 1957, the S&P has closed higher on just over 52% of days.  The skew between the first part of the year and the last month and a half has brought the full year closer to the long term average.  For all of 2012, 55% of days have been positive. 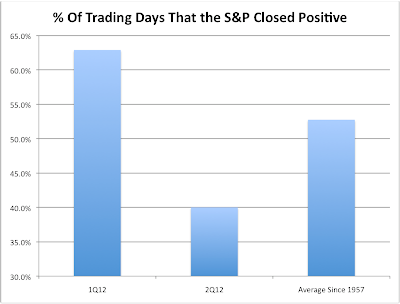 As liquidity continues to pool in the US banking system, the securities portfolios of US banks have gotten larger and larger.  This phenomenon coupled with the low yield environment is likely at least part of the reason that JPM was “hedging” by buying corporate credit synthetically through the sale of CDS on the investment grade credit index.  Even though JPM was playing around with assets with credit risk, the percentage of securities held in government and agency bonds continues to rise.  As shown below, since 2009 the percentage of Govies and Agencies in commercial bank securities portfolios has increased to 69% from 52%. 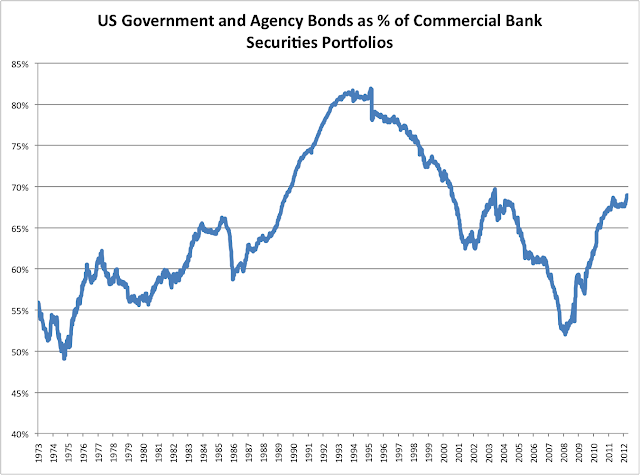 Interestingly, the banking system has started to push more of its portfolio into MBS rather than treasuries.  The number of non-MBS government securities as a percentage of the securities portfolio has fallen slightly from 22% to 18% since 2010.  (The Fed has only tracked this data since 2009) 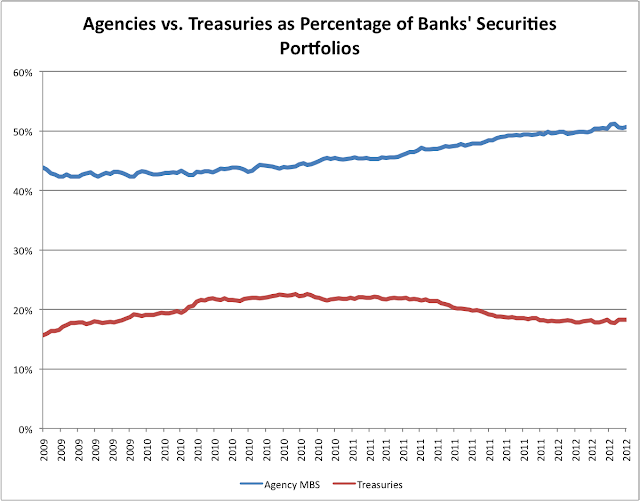 It hasn’t had much effect on global equity markets today, but China did decide to ease monetary conditions on Saturday by lowering the reserve requirement on large banks.  The cut, which will be effective on Friday of this week will drop the requirement back to 20%, which is still quite high by international standards.  Below is a chart showing the ratio since 07. 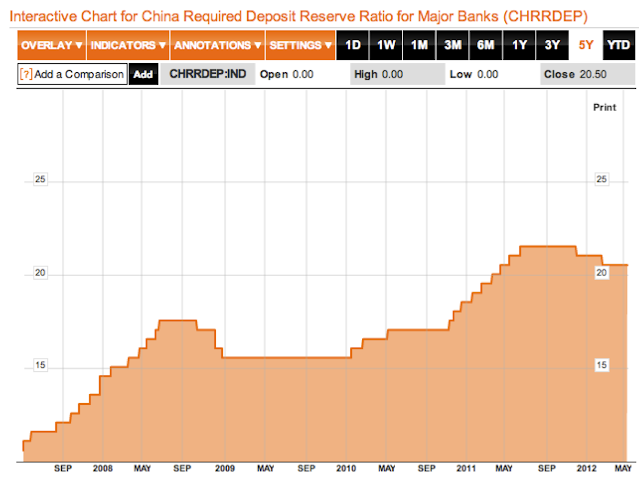