A perpetual bull argument on Wall Street is that “there’s so much money on the sidelines” that will continue to push the market higher.  For a while in 2009-2011 this was true: individual investors had fled riskier markets and shoved money into lower risk money market funds and CDs.  The entire thesis of quantitative easing is that by keeping interest rates low, you can force this money back into riskier assets.  As far as this goal is concerned, the two charts below show that the mission has been accomplished.

Retail money market funds made a new multi year low last week.  They fell to a level not seen since 1998. 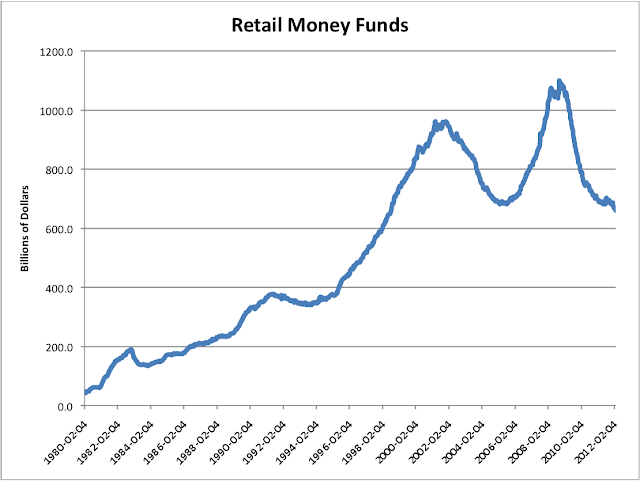 Similarly, small time deposits at US financial institutions are hitting new multi-decade lows.  They are about to break through a level not seen since 1980, when this time series (as tracked by the Fed) began. 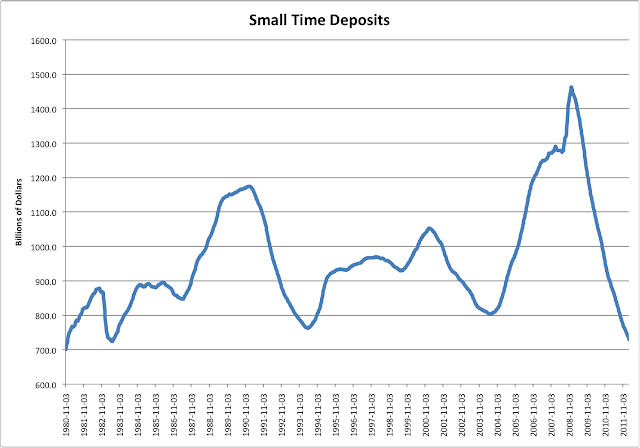 Probably because the S&P is at 1400 and oil is over $100 a barrel, CNBC was legitimately discussing the possibility that the Fed may not be able to keep rates at 0 through 2014.  While raising rates would probably be rational in an inflationary environment, below is one reason why the Fed might not be able to raise rates even if they wanted to for the foreseeable future.

The rapid growth in US government debt has made the finances of Uncle Sam extremely sensitive to changes in interest rates.  Below is a rough analysis of what the effect of higher interest rates would be on Federal Government interest expense. 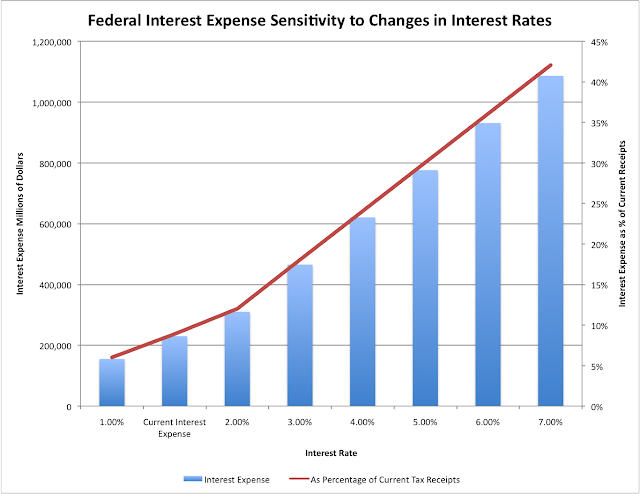 There was an article on Bloomberg this morning about the high pay of executives at Berkshire Hathaway.  It highlights the following figures:

Berkshire gave $17.4 million in 2011 compensation to Thomas P. Nerney, CEO of its United States Liability Insurance Group; $12.4 million to Geico Corp. CEO Tony Nicely and the National Indemnity Co. unit gave $9.26 million to Ajit Jain, according to filings to state regulators. Berkshire, which is set to send its annual-meeting notice to shareholders today, said in last year’s proxy that Buffett’s salary remains $100,000 at his request.

For comparison, here is a list of the highest earning athletes in 2011, broken out by salary and endorsements.

Not a single one of Buffet’s execs would have made the top athletes list even though GEICO did $15B in revenue in 2011.  The LA Lakers, which paid a $25m salary to Kobe Bryant did about $215m total in revenue.  In other words, Thomas Nerney gets paid 2/3 as much as Kobe Bryant to run an organization about 70x larger than the one that Kobe is an employee of.
Nerney obviously isn’t the highest paid CEO in America–below is that list based on total comp.  Below that is the list if you just included salary.  Compare the base salary list to the salary of pro athletes and CEO pay doesn’t look so bad.

High yield spreads are still slightly wider than they were at this time last year, but since treasury rates have fallen, the effective yield is back to multi-decade (perhaps all time?) lows on the BofA High Yield Master Index.  At 14x earnings, the earnings yield of the S&P 500 is roughly the same as the effective yield of the high yield index.  Is one of these metrics poised to break lower?
Given that there is a material risk of default for high yield bonds, it would seem that there should be some base level of interest rate received that compensates for the credit risk…if that level is 7.5% then there’s not much return to capture from high yield other than carry interest. 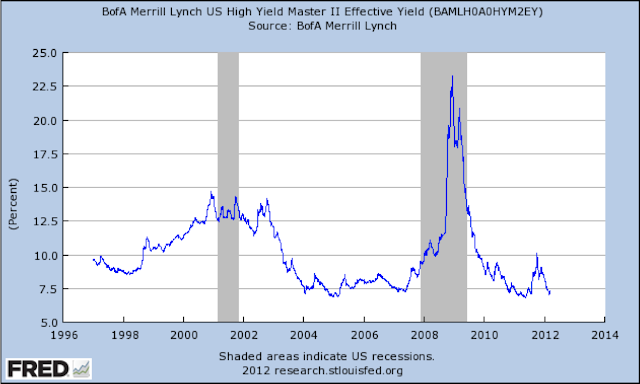 Treasury yields may have finally started to rise over the last several days, but compared to CPI they still haven’t risen nearly enough.  CPI was up 2.9% y/y as of the most recent reading, but the 10 year treasury bond is only yielding 2.27%.  On average over the past 40 years, the 10 year treasury bond has yielded 2.5% (the red line on the chart) more than trailing CPI, which would imply that today’s yield should be 5.4%.

Another important assumption made as part of the stress test:

WFC, for example has ~$200B of Treasury, Municipal and Agency obligations.  If you assume a 10% loss on these, WFC, often considered to be the strongest large bank in the US, would not have passed the stress test.

The Fed released the results of its most recent stress test yesterday, which showed that the majority of US banks have plenty of capital to survive a hypothetical stressed economic scenario.  Below are the assumptions that were used to administer the test, which include a 50% decline in equity prices, a 20% decline in housing markets and unemployment increasing to 13%.

The assumptions made for credit spreads are a little bit curious.  BBB spreads peak at around 500bps, despite peaking at 800bps in 2008-09, and mortgage spreads also don’t increase by much even though the housing market would be falling apart and Fannie and Freddie would likely be in need of another few hundred billion dollars in bailouts.

The most egregious assumption is likely the rate on the 10 year treasury though.  The most likely reason that the US would enter such a severe recession in the next 5 years is because the government has to balance the budget in a Greek-like austerity.  In that scenario treasury yields wouldn’t be below 2%.

The S&P 500 and Gold are curiously divergent for the day of a Fed meeting.  One would think that if the Fed signaled more accommodation both might rally, and if more hawkish both might fall.  Despite the divergence and gold’s underperformance since September, the S&P still hasn’t recovered fully from last summer’s drop when priced in gold.

There’s a lot of talk about DIS today after John Carter, which cost $250m to make, flopped by only grossing $30m in its first weekend.  Carter continues a rough period for Hollywood in getting audiences to the theaters.  In 2011, domestic box office gross was down 3.7% and ticket sales were down 4.2%.  While there are a lot of arguments as to why this may be the case, quality has to be a primary one. Not a single movie in the top 10 this week had positive reviews at review aggregator rotten tomatoes.   If Hollywood wants people to go to the movies still, they should start making better movies. 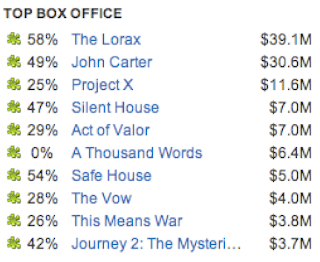 They rarely make headlines anymore, but Fannie and Freddie are still under the conservatorship of the US government and both recently filed their 10-k for 2011.  As an exercise, I thought it might be interesting to run the numbers on how large the capital deficit is at each institution if they were required to adhere to Basel III requirements.  Below are the numbers:

Fannie Mae currently has -$4.5B in equity on its books, and Freddie has a deficit of $146M.  This implies that in total the two institutions would need to raise more than $180B in equity in order to be stand alone institutions compliant with Basel III in 2019.  This is roughly equivalent to the face value of the Greek Bonds which were just swapped.  Any chance that congress deals with this anytime within the next 10 years?