It’s tax season and Friday, so here’s my offbeat post for the day:

Last year Warren Buffett wrote a controversial letter to congress claiming that he only paid $6.9m in taxes in 2010 (a 17% tax rate) and suggested that the rich pay more in taxes.  Depending on which side of the political spectrum you’re on, you might think of Buffett as a hero or as a turncoat, but what you probably didn’t notice is that Buffett deliberately understated the amount of taxes that he paid because he didn’t include his share of taxes paid through Berkshire Hathaway.

As the father of modern value investing, Warren Buffett knows better than anyone that an investor’s share of the profits earned by a company may as well be personally earned by the shareholder himself.  By extension, taxes paid by the company are paid by the shareholder as directly as if they were reported on his personal tax returns.  To Buffett, there is little distinction between company and himself. A company is just a legal collective of shareholders, a partnership.  In his most recent annual report he touches on this subject in discussing how GAAP does not adequately credit Berkshire for its holdings in WFC, IBM, KO, and AXP because it only allows him to recognize dividends:

We view these holdings as partnership interests in wonderful businesses, not as marketable securities to be bought or sold based on their near-term prospects. Our share of their earnings, however, are far from fully reflected in our earnings; only the dividends we receive from these businesses show up in our financial reports. Over time, though, the undistributed earnings of these companies that are attributable to our ownership are of huge importance to us. That’s because they will be used in a variety of ways to increase future earnings and dividends of the investee. They may also be devoted to stock repurchases, which will increase our share of the company’s future earnings.

Just as Warren Buffett knows that GAAP doesn’t account for Berkshire’s true economic value derived from owning IBM, WFC, KO and AXP, he also knows that his tax returns don’t represent his true income for 2010 and nor does the personal tax liability recognized on his 1040.  The $62m that he reported as gross income only represents what he earned as “dividend” from his personal investments.  BRK, famously, does not pay a dividend (perhaps so Buffett can avoid paying extra taxes).

Buffett argues to his shareholders that BRK isn’t fairly credited for its share of earnings in its “big four” public holdings.  But in his letter to congress he ignores his own earnings from his holding of BRK (and by extension the taxes he paid on them).  Is it conceivable that Warren Buffett would think of his personal ownership of BRKs earnings differently than BRKs ownership of KO, WFC, IBM and AXP’s?   If Buffett starts advocating raising the corporate tax rate, then he should start turning heads.

Late last year the Fed reinitiated liquidity swaps with foreign central banks (read: Europe).  If memory serves, the move was good for a 3%+ rise in the S&P 500.  Now that the crisis in Europe is slowing down for the moment, these swaps have been rolling off the Fed’s balance sheet.  The swaps did rise slightly last week, but below is a chart showing the progress of the withdrawal. 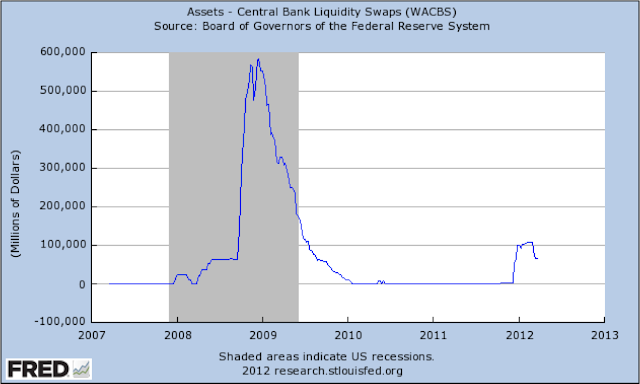 The S&P 500 and Dow have each by now made new multi year highs.  Small caps, however, have not kept pace.  The Russell 2000 is still below its 2011 peak, and is underperforming again today. 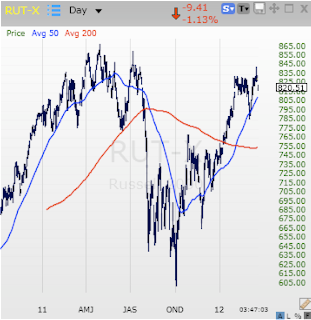 The good people at Bespokeinvest.com just posted a long term chart of the S&P 500 and Nasdaq which highlighted that while the S&P is only 11% from its all time high, the Nasdaq is still more than 60% away.  For historical comparison, below is a chart of the Dow from 1929 through 1958.  It shows that it took the Dow almost 25 years to get back to its 1929 peak.  After 12 years, the Dow still would need to rise by almost 300% to get back to its peak at 386. 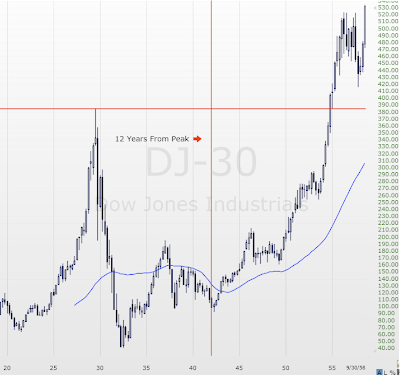 Even after today, the S&P 500 is still up double digits for the first quarter of 2012.  This follows another double digit quarter: in 4Q11 the S&P was up 11%.  Since 1957, the S&P 500 has only been up double digits two quarters in a row five times.  However, if this is the sixth, it would be the third time in three years that it’s happened.  Below is a list of the times that this has occurred and the performance of the index in the subsequent quarter.

The XLF is up 21.6% year to date, which is more than any other sector SPDR.  KBE, the large cap banking ETF is up a little more than that ~22% driven by BAC which is up a stunning 76% for the year.  BAC is still the cheapest large banking stock in the group, trading at just 0.73x tangible book value.  Large banks as a whole are still cheaper than their smaller regional counterparts as evidenced by the table below:

Most people would tell you that this discrepancy is driven by concerns over what regulation such as Dodd Frank will do to large banks’ earnings power.  Will regional banks really earn a 40-50% higher ROE than money center banks will though? That seems to be what the valuations are implying.

Along with the previous post, a chart showing total world steel consumption from 1970-2004. 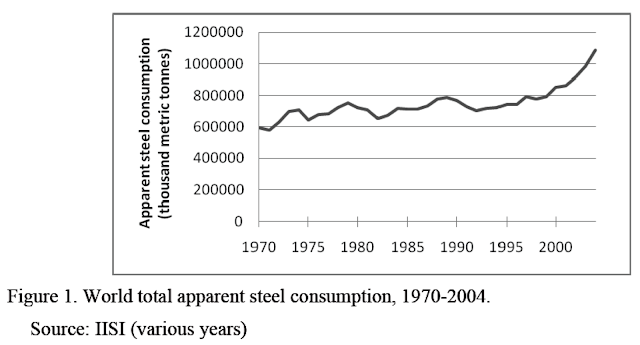 BHP’s comments that iron ore demand growth from China will slow helped send the market lower today.  In that context, below is China’s steel consumption relative to the rest of the world as of 2010. 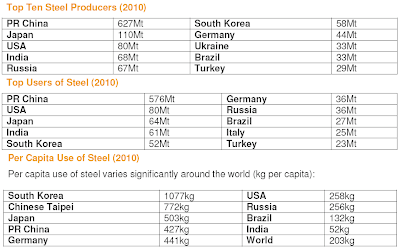 It may be somewhat surprising to notice that China is far from an emerging market as far as steel is concerned.  China is the largest steel producer and consumer in the world on an absolute basis.  What’s a little more surprising though is that on a per capita basis China consumes much more steel than the US does.  Can China grow per capita steel demand even more?
Presented without much analysis, the top gainers on the S&P 500 year to date.  Most of these were significant laggards in 4Q11. 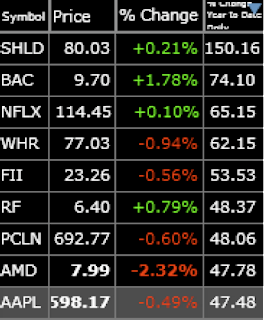 1Q12 is just two weeks from being over and so far it has been quite a quarter.  If the quarter closed today, it would be the 9th best 1st quarter since 1957.  Below is a list of the other 10 best first quarter performances for the S&P 500.

The list also includes the performance for the the second quarter in those years and for the full year.  In 9/10 years the S&P was positive for the rest of the year after a strong first quarter.  The second quarter has seen a drop in performance from the first quarter every time though.
It should be noted that the only year that the S&P wasn’t positive after the first quarter was 1987, the year of Black Monday.  Also, 1998 was the year of long term capital–the index fell back to flat in September, but made all of its ground back in the 4th quarter.
Best 1st Quarters for the S&P 500 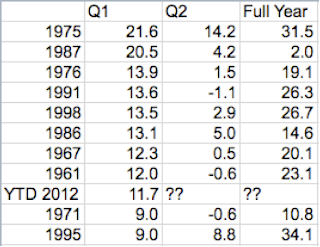