Logitech makes peripheral products for PCs: keyboards, mouses, webcams, etc.  I thought this was an interesting and impassioned statement made by the CEO at a tech conference a couple weeks ago.  He may be a biased source, but his argument is that the demise of the personal computer relative to tablets and smart-phones is greatly overstated.

I think that the issues that we have had in the past two or three years, is to believe what the naysayers were saying, is to believe that the potential for growth around the PC platform in the established consumer developed market was gone. It is not. And it is not because I’m blind and I don’t see the growth of the iPads and tablets and I don’t see the declining or very modest growth of the PC platform, but new sales in the PC platform, we see all of that.
But first of all there is just way too many PCs out there to be discounted, I don’t know of anybody that bought an iPad who threw away his laptop, in fact the laptop and the PC in general continues to be used in certain circumstances and as the iPad becomes the mobile platform of choice your laptop PC is even more residential and even more friendly to add-ons. So I think that we believed it because everybody was telling as this and it’s because it’s the simple thing to believe and in fact that was a mistake. In fact I don’t believe it at all, I think that obviously we have tremendous opportunities in emerging markets and around the PC of course, largely underpenetrated but we have solid opportunities across the number of categories in the western world in addition to what we are putting together more intensively which is a focus on PC peripherals in the business market, which is way underpenetrated on our side, and it’s an add-on chance.

Not a whole lot.  Technically they lowered the cost of liquidity swaps with foreign central banks so that European banks can swap euros for dollars and therefore have better access to dollars.  Of course, the swap lines have been open and no banks seem to be accessing them…

Below is a time series of the liquidity swap line of the Fed’s balance sheet.  Compared to $580B in swaps in 2008, today there are just $2B.

Apparently it was a little premature to make a post highlighting the number of 3% days that the S&P has had because we ended up with a 4% day–of course, an even more rare occurrence.  In nearly 14,000 trading days since 1957, there have only been 83 times that the S&P has been up or down by 4% or more in a single day.  More than half, 46 of those times have been between 2008-2011.  71% of these days have happened since 2000.  The frequency table is presented below. 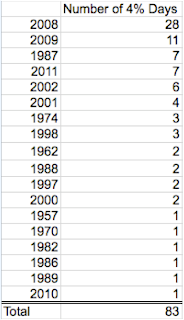 For reference, the first leveraged ETF began trading in 2006.

Another day, another >3% change for the S&P 500.  If it seems like volatility continues to be extreme, the chart below should be a supporting image.  The chart shows the number of days each year that the S&P 500 has had a more than 2% or 3% move (in either direction) since 1957.  Clearly volatility has increased over time.

The index is still below 100, which is the base level of activity that was present in 2001, when the index was first created.  Below is the regional data comprising the index.  Only the West and South are above 2001 levels, and even then only marginally so.

Pending home sales data for October was released this morning and showed a nice 10.4% m/m jump on a seasonally adjusted basis.  Not-seasonally adjusted, the data still showed a healthy 8.3% increase.  Pending home sales is one of the more forward housing indicators because its data precedes settlement which happens 1-2 months later.  Existing home sales only measures transactions that have been settled.  Still, the index is below 100, which is the base level of activity that was present in 2001, when the index was first created.

Below is the regional data comprising the index.  Only the West and South are above 2001 levels, and even then only marginally so.

A well capitalized institution is the highest standard.  At each subsequent level, the ratio drops by 100 bps (e.g. an adequately capitalized bank would have a leverage ratio of 4%).
BAC’s stock is at $5 per share today because of a perception in the marketplace that the company doesn’t have enough capital.  Below are the capital ratios for BAC as of Sept 30.  Notice that Tier 1 capital and Total capital ratios are 500 bps above the well capitalized threshold and tier 1 leverage is 200 bps above the highest FDIC capital threshold.
BAC Capital Ratios at 3Q11

If this isn’t enough capital, then can there be an adequate amount?  Banking regulation like Basel III has focused primarily on forcing banks to hold more capital.  But if market sentiment turns, is there any amount of capital that is enough?

BAC’s stock is starting to trade as if there is real risk of the bank collapsing.  If it does, rest assured that it wont be a symptom of capital, but instead liquidity.  BAC faces the threat of a bank run.  As far as liquidity is concerned though, BAC also has a huge stockpile.  BAC has $81B in cash and equivalents.  Adjusted for the size of its balance sheet, WFC has about half that much.  WFC has $18B in cash.

If you trust the audited financial statements (do you have a specific reason not to), then BAC isn’t just well capitalized, it has a fortress of a balance sheet.  Its fortress happens to be under attack though, and under a large enough surge, even the strongest walls can fall.

The S&P 500 peaked this year on May 1, but that doesn’t mean that there haven’t been components that have gone up since.  The index is 12% lower than it was then, but there are 99 (20% of the index) stocks which are still positive since.  Below are the top 20. 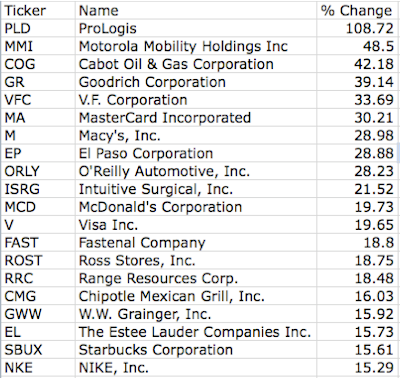 The anatomy of a chapter 11 filing:

Today is a unique day in that while the S&P is up 40 bps, the Russell 2000 is actually negative by 20 bps.  Large cap’s outperformance for the day is making up ground from yesterday when the Russell outperformed by a larger margin.  YTD though, the smaller stocks that make up the Russell 2000 have badly lagged the S&P.

Many think of the Russell as a higher beta play on stocks, so maybe it’s not too surprising that it’s lagging.  Still, after a 10 year period of outperformance, the Russell trades at 19x forward earnings while the S&P trades at 11x.  Certainly this has some influence.