Equity markets are rallying today on news out of Europe that the ECB stands ready to conduct Outright Monetary Transactions (OMT) of sovereign debt.  This is the second major monetary weapon that the ECB has used to try to combat the European situation.  The other, performed earlier this year, were Long term refinancing operations (LTROs).

Below is a comprehensive list of ECB monetary tools for a framework of where OMT fits vs LTRO (note LTROs were extended to 3 year maturity in 2012).  The table is from a monetary policy primer that the ECB put out in 2011.  It can be found: here. 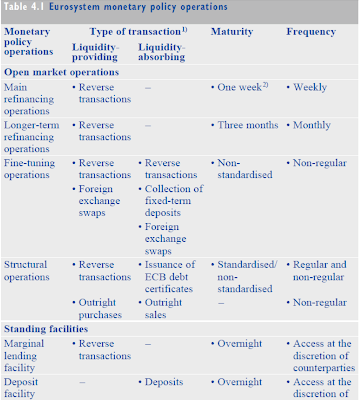 Even though the tools are listed separately, in the current framework, there isn’t much difference between LTRO and OMT.  In both operations, the ECB is effectively taking unwanted sovereign paper of maturity 1-3 years out of the banking system and onto its balance sheet.  The major difference is that the ECB committed to a range of size for LTROs (the two combined ended up being over 1T Euro).  For the OMT, the ECB is keeping the promise open ended.
The other main difference is that it’s unclear to what extent the LTROs were fully sterilized.  Deposits ended up back at the ECB, but the ECB didn’t exactly lock up the new liquidity by issuing ECB debt securities.  The “sterilization”mechanism of the LTRO is that eventually after three years the money comes back to the ECB when the repo is settled.  But until then the money supply is effectively raised.  With OMT reports are suggesting that the ECB will sell current securities holdings and thereby not increase its balance sheet.  This would make OMTs much less effective than LTRO as a QE mechanism.  It would also limit the size of OMTs to roughly 270B Euro of securities that are already on the ECB balance sheet.  However, an important undiscussed tool that the ECB has is the issuance of debt securities to absorb liquidity.  If the ECB issued debt to absorb OMT purchases, this could make even sterilized OMT a program of unlimited size.  This option would effectively be a debt swap, sovereign debt for ECB debt across the entire Eurozone.  With central banks every program has the possibility of being of unlimited size, OMT could formalize it.  That’s the important point.
Central banks have unlimited authority to print money if they choose to do so.  The reason that the US isn’t in a European-style situation is the unwavering belief that Ben Bernanke stands ready to do everything possible including buying US government debt with printed money to ensure that the US would never default.  Up until now the markets seemed to not believe that the ECB would act similarly, even though the ECB has repeatedly intimated that it would.  Perhaps today the market is finally getting Draghi’s message.
Ultimately it comes down to whether or not the market believes that Draghi is willing and able to buy sovereign debt in unlimited quantities.  If the market does, then we could have a “long lasting” solution to the European problem–at least as “long lasting” as the US or Japanese debt solution is.  Of course you cant solve an insolvency problem with liquidity and so in the case of all three regions, monetary policy can only be so effective.  If debt and deficits aren’t reduced in real terms then policy has only shoved the burden onto the monetary system with inflation as the result.