Between the Yen and the Euro, the foreign exchange markets have seen some excitement in recent months.  One currency cross that has been anything but exciting though has been that of the Euro against the Swiss Franc (EUR/CHF).  After a rapid depreciation of the Euro during the heart of the European Financial Crisis, the Swiss National Bank decided to explicitly peg the Swiss Franc at 1.20 EUR/CHF.  The SNB had maintained a “soft peg” up until that point by purchasing EUR in the open market, but the explicit peg was needed to stop the appreciation.

Below is a chart of the evolution of the SNB balance sheet as it has tried to stop the CHF from appreciating.  The balance sheet has expanded by nearly 5x and foreign currency now represents almost 90% of the bank’s assets.  As a result, the CHF has effectively become backed by the Euro. 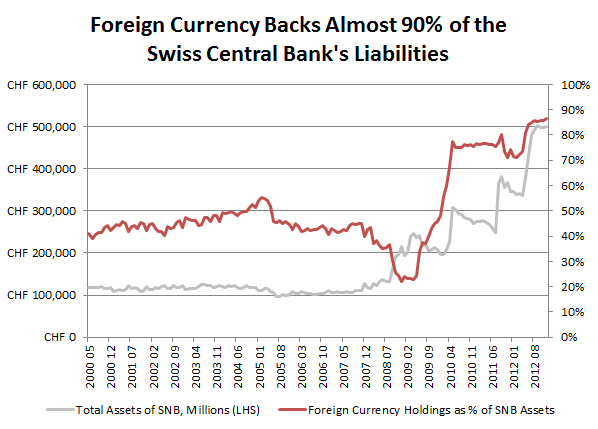