Along with announcing more QE today, the Fed reiterated that Operation Twist will continue through the end of the year.  Interestingly, the Fed might not be able to extend twist beyond year end even if it wanted to.  That’s because the Fed has almost completely exhausted its portfolio of short term treasuries, and at the current pace it probably wont have many short term Treasuries on its balance sheet at year end.

Below is a chart of the maturity profile of Treasuries on the Fed’s balance sheet.  In total, the Fed owns $1.6T worth of Treasuries, and only $490B of that is paper with less than 5 years of maturity.  Only $3B of that has a maturity of less than 1 year.

At the current pace of $45B per month, the Fed will sell 30% of its remaining 1-5 year holdings by year end and be left with about $350B of 3-5 year maturities (assuming the 1-5 year portfolio is roughly equally weighted by maturity and they sell the nearest maturities first).  From there, it would be about 8 months until the Fed has sold all maturities 5 years and in.

The end of operation twist could have a couple of major implications for rates markets in 2013.

1) Twist is empirically the only monetary program so far that has actually flattened the curve while pushing equity prices higher.

2) Since the new QE is only focused on mortgages, the Treasury market could be missing a major buyer in 2013.

Could this, along with the very real inflation implications of printing money in an economy with tightening capacity utilization finally be the straw that breaks the rates market’s back? 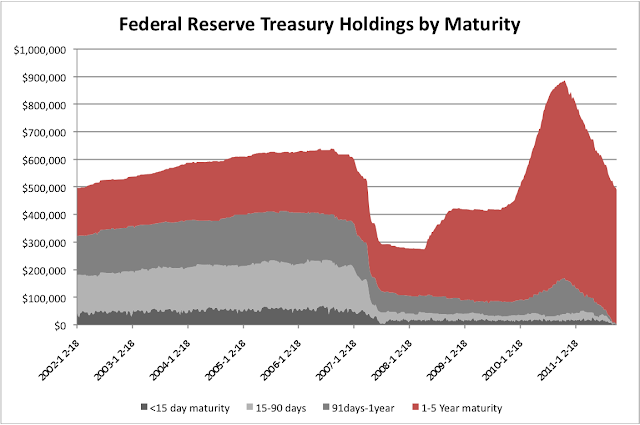