As the Dow and S&P 500 continue to close at new all time highs, the poor Nasdaq is the only major US index which can’t follow suit.  The $COMPQ is still 30% lower than the highest level it reached in March of 2000, 14 years ago.

After the depression it took the $DJIA 25 years to get back to its former peak, and while the Nasdaq actually had a steeper climb in the 7 years prior to its peak, it’s currently on a faster recovery pace as well.  Given that some of the Nasdaq’s key components (AAPL, MSFT,et al.) are not particularly expensive stocks it’s possible that we wont have to wait another 11 years for a new high–but cheap can always get cheaper. 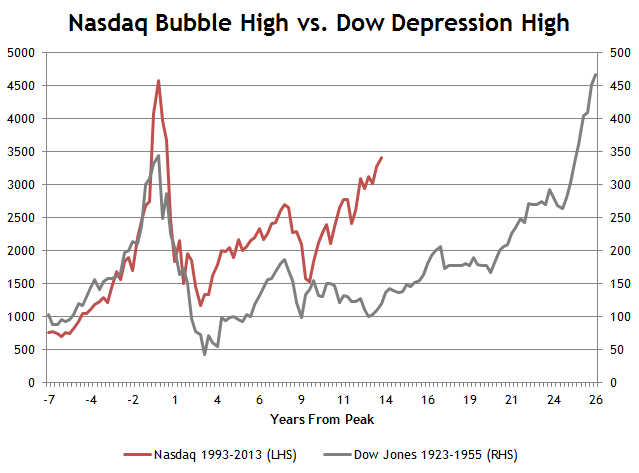 That’s a genuine question.  I wish I had some explanation, but unfortunately the chart below has me scratching my head.  After four years of closely following the monetary base, commodity prices have diverged since the start of QE3.  The S&P has rallied (true to past QEs), but gold and oil have each fallen as the monetary base has expanded.

If the Fed is driving this $SPX rally by tacitly devaluing the dollar, then shouldn’t commodity prices be rising as well?  Alternatively, perhaps the rally is being driven by genuine economic strength.  In that case one might argue that commodity prices are falling because the dollar is strengthening on an absolute basis.  However, if that’s the case then why aren’t cyclical companies leading the equity rally?  And shouldn’t commodities be catching some sort of “improving economy” bid?  Are commodities seeing something that the equities aren’t? Like the end of QE4Good? 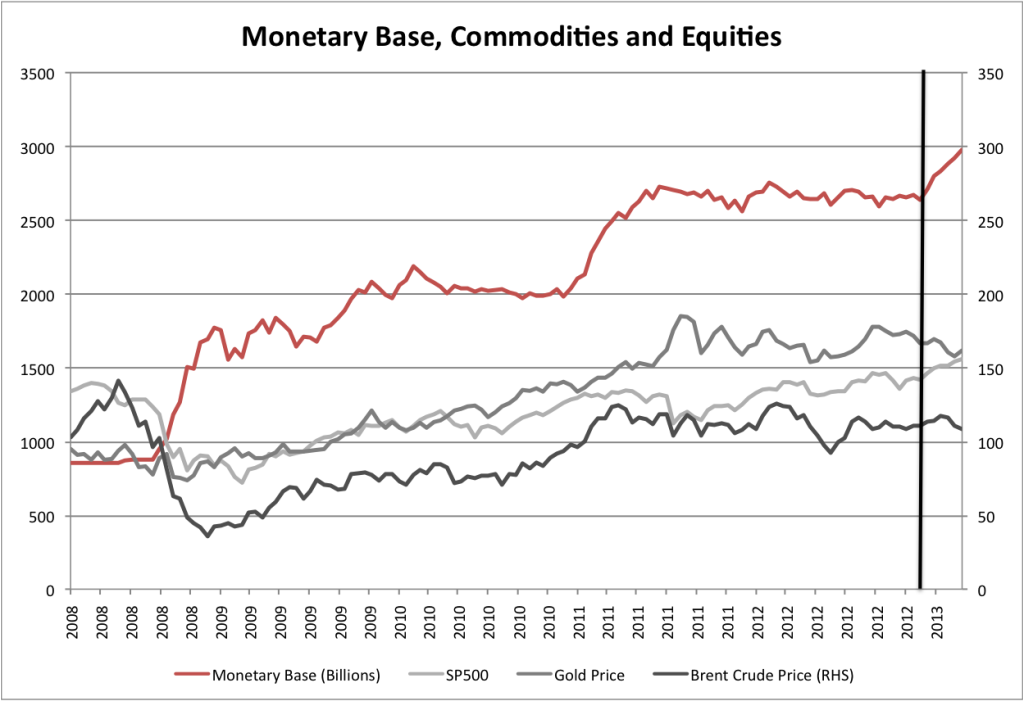 Even though we had a choppy April last year, this month has historically been a good one for equity markets for the last ten years.  On average the S&P 500 has risen almost 2% in April with the heart of the advance coming in the back half of the month.  The index has been positive seven of the last ten years. 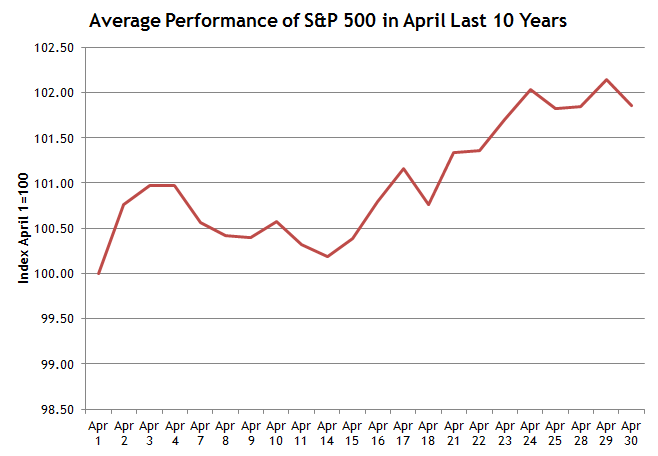 Similar to housing starts last week, the Case Shiller home price index (reported this morning) showed a solid improvement in the housing market versus last year.  The 10 city Case Shiller index was up 7.3% y/y in January, and the 20 city index was up 8.1%.

While the numbers are encouraging, prices still have a long way to recover.  A longer term look at the Case Shiller index shows that prices are mostly flat since hitting an initial bottom in 2009 and still down 30% from the peak.  It’s now been 80 months since home prices peaked.  For comparison, 80 months after the tech bubble burst the S&P 500 was back at all time highs. 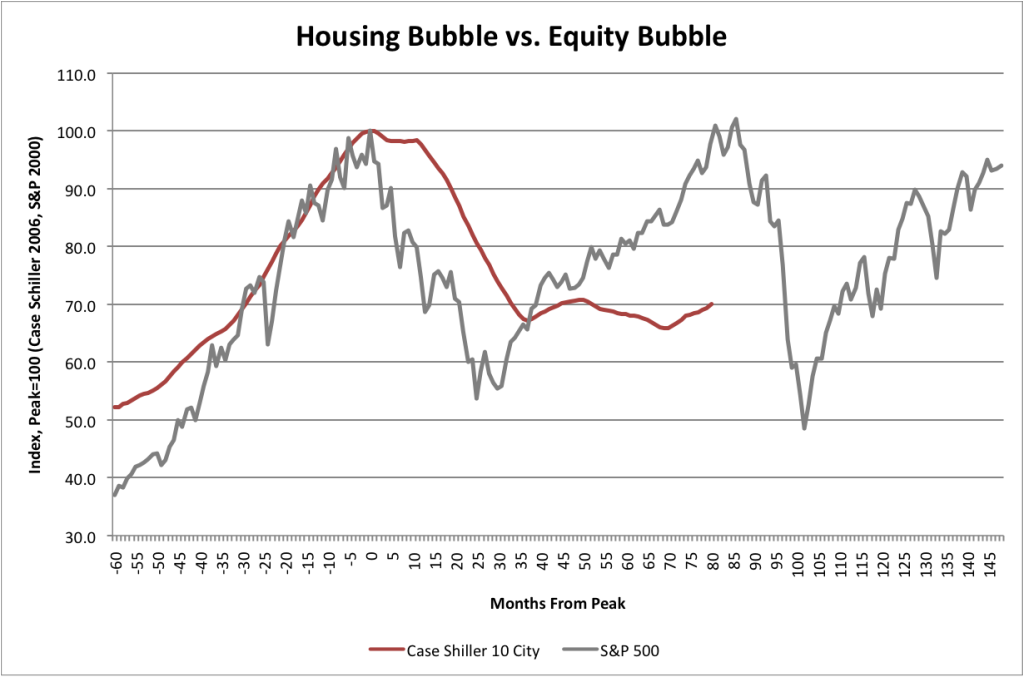 Since Thursday is the last day of the quarter, there will likely be plenty of talk about window dressing as the week goes on.  It’s generally assumed that window dressing (purchases made at the end of the quarter to manage the optics of a portfolio for quarter end reporting) pushes stocks higher.  Below is some analysis to gauge whether or not that’s a fair assumption.

The chart shows the average week over week change in the $SPX on the final day of each quarter since 1990. According to this analysis, the change in the final week of the quarter has exhibited some seasonality.  The first quarter has tended to see negative returns, while the fourth quarter has tended to see the most positive.  For reference, the average weekly change of the S&P 500 in all weeks is about +3 bps over this time period. 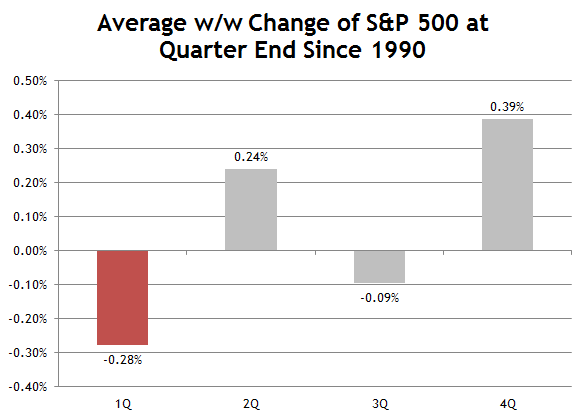 The ratio of the price of an ounce of gold and the level of the S&P 500 held near parity for a couple years coming out of the financial crisis.  In the summer of 2011 they diverged, and at its low point, the ratio was 0.6 ounces of gold to “one” S&P 500.  Since that time though, gold has moved sideways as the $SPX has risen and now the ratio is almost back at parity.

There’s nothing magical about the ratio, but it does give some indication of relative value.  Historically, the highest the ratio ever reached was 5.5 ounces per $SPX in 1999 and the lowest it ever reached was  0.13 ounces in 1980.

Earlier in the week I posted that the $SPX has started the year on virtually the same pace that it started last year.  It turns out that Chinese equities are on a similar path as well, but a slightly less favorable one.

Even though China and the US both got off to fast starts in 2012, the Chinese markets (represented here by $FXI) started to roll over in February.  This year $FXI tracked the $SPX rise through January but has diverged since the beginning of February once again.  Since US stocks ended up giving up almost all of their gains in April and May of 2012, one could argue that Chinese markets sensed economic weakness before US markets did.  Let’s hope that this year doesn’t continue to repeat.  Last year Chinese equities and many US listed stocks sympathetic to the Chinese markets (e.g. metals and mining companies) didn’t really find their footing until September. 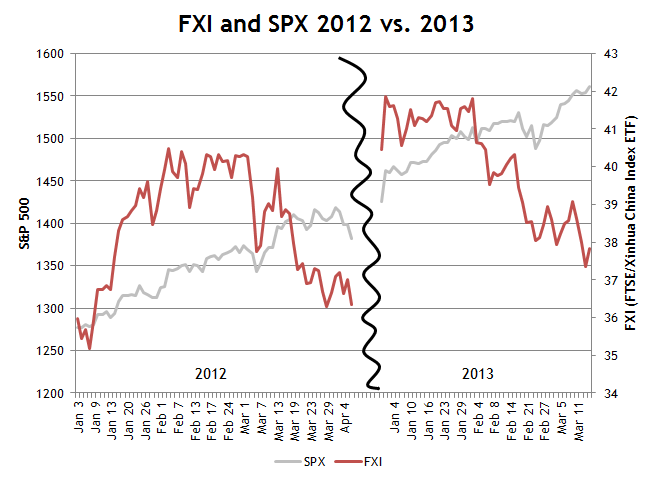 The best performer overall is $WYN which is up 1700% since March 9, 2009.  That’s followed by two media companies: $CBS and $GCI.  The only bank on the list is $FITB, which comically hit a low of just under five-thirds.  Generally, the common thread running through each of these companies is a high amount of debt. 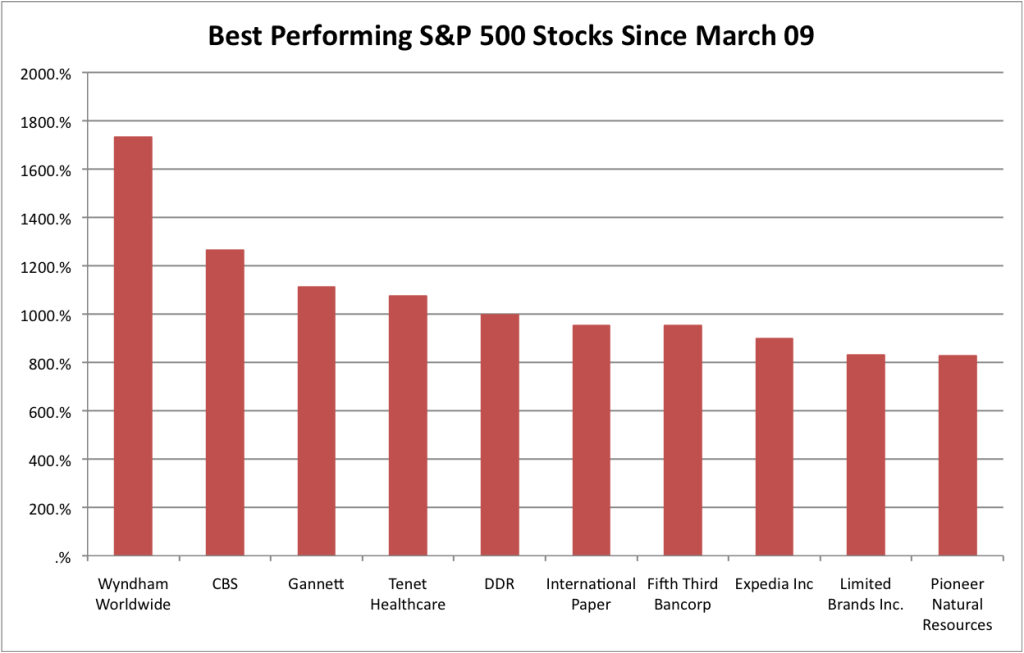 As the Dow inches closer to a new all time high, the S&P 500 is still about 1% away from a new high of its own.  Part of the reason for the divergence is that the Dow has outperformed the S&P 500 by that amount year to date.  However, the Dow did underperform the S&P 500 by almost 6% last year and actually has a history of underperforming the S&P 500. 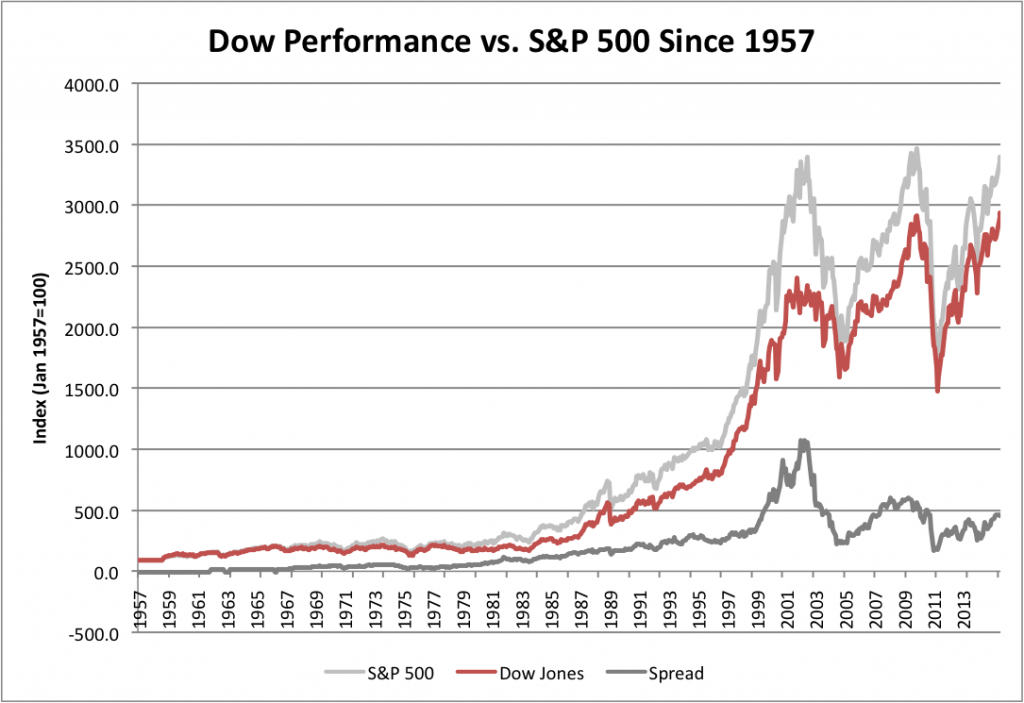 $XLV made another new all time high this morning, and is now almost 15% higher than the highest level it reached in 2007.  Being a “defensive” sector, generally one might expect healthcare to be under-performing the $SPX in a bull market; however since mid 2011 $XLV has notched steady out-performance versus the S&P 500.

Below is a longer term chart going back to 1999 which shows $XLV’s relative performance in different market phases.  The most recent period doesn’t exactly fit with the pattern.  This, along with the out performance of consumer staples companies, may reveal some underlying fragility in market sentiment. 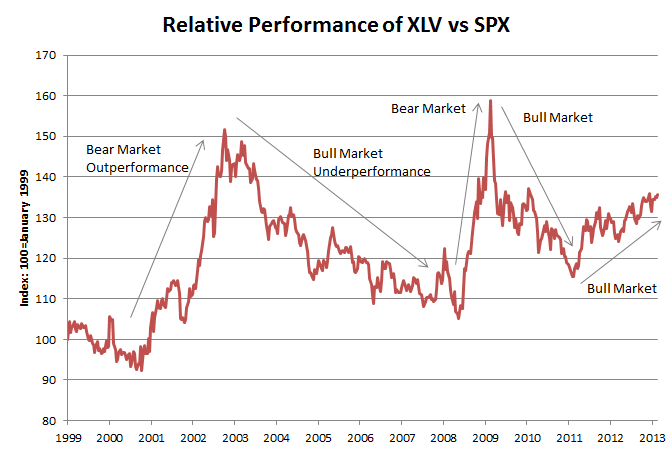