“Based on our regular economic and monetary analyses, we decided to keep the key ECB interest rates unchanged. We continue to expect them to remain at present or lower levels for an extended period of time, and well past the horizon of our net asset purchases.”

“Regarding non-standard monetary policy measures, we confirm that the monthly asset purchases of €80 billion are intended to run until the end of March 2017, or beyond, if necessary, and in any case until the Governing Council sees a sustained adjustment in the path of inflation consistent with its inflation aim.”

“Overall, while the available evidence so far suggests resilience of the euro area economy to the continuing global economic and political uncertainty, our baseline scenario remains subject to downside risks.”

Slow growth expected in Q3 in the Euro Area

“To sum up, a cross-check of the outcome of the economic analysis with the signals coming from the monetary analysis confirmed the need to preserve the very substantial amount of monetary support that is necessary in order to secure a return of inflation rates towards levels that are below, but close to, 2% without undue delay.”

Performance isn’t uniform, sign of turnaround in Europe though

“performance is not uniform in all areas but if I had to sum them up in just a few words, I would say this. In France, good performance illustrates the dynamic nature of our multiformat model. In Europe, there is an encouraging sign of a turnaround. In the emerging countries, performance which has been boosted essentially by Latin America is quite remarkable.”

“In Europe, in 2014, sales stabilized after several years of drop. This is a performance which has been brought about by the recovery in Spain combined with a good stability in the other countries and this is particularly true in the fourth quarter. This is important, the fourth quarter of 2014. Brazil and Argentina have enjoyed a remarkable year with combined organic sales that have risen by 18.1%. That means that over the last three years, the organic rise apart from fuel sales here is close 50% in this area.”

“in Asia, organic sales have gone down and now that reflects a more frugal style of consumption in China and there is no sign that this trend is going to change in the fourth quarter.”

Poland continues to be a difficult environment

“oland, Poland continues to be a difficult environment and in fact here, operating margins went down in 2014 but the last half year seemed to show signs of a notable improvement and this again is the fruit of the work and I ask often in these countries.”

Having to shut down stores in China

n China, there was no change concerning the frugal or limited consumption for the second consecutive year, our sales of shopping carts of the — and discretionary products suffered from that environment. We opened nine hypermarkets in China in 2014 and thus, adapting our opening phase to that environment. As I said before, we also shut down a few stores. Against that background, Carrefour has — is making its model the — is developing a change in this model”

Omni-channel a talking point for Euro-retailers too

“The strength of our multiformat approach is going to be shown essentially in the development of a multichannel approach because the future lies in the combination of the traffic in stores and the use of the internet.

Our clients are now cross channel customers, digital technology has enabled us to highlight our offerings, strengthen our image and enable us to develop our sales. We are strengthening our knowhow in all the fields, smartphones, contract free payments, click and collect, digital terminals in our stores. In this connected environment, the store is, of course, the major advantage. It is the point where all these channels converge.”

“Physical contact creates trust and this is something that cannot be replaced elsewhere.

According to our recent study, the store is the channel preferred by 68% of people in France. That is up from 55% in 2013. So the density of our network of stores will make the difference. On average, every person in France is at — 7 minutes on average, from a Carrefour store.”

“since the third quarter of 2013, China has become more frugal is the word they use themselves in China, with a more limited consumption.”

“we’re seeing clear signs of a return to profitability, as first quarter pre-provision earnings at €363 million, up plus 47% year-on-year were supported by the bottoming out of debt decline in NII in Greece and the absence of trading losses.”

“Regarding deposit flow Paul has made reference to that before that we see a steady of flow back deposits into NBG, we have had certain events that kind of nerved investors, nerved depositors in general even across Europe, looking at the developments in Cyprus, having gone through this period and after that seeing the positive spin that developments in Greece have taken and all the communications it’s coming out of the Eurogroup and all the rating upgrade et cetera. We see a positive tailwind in Greek confidence and we see these deposits, and we expect these deposits to continue to flow back into Greece in NBG particular, but that’s the, is a matter of sentiment which is a slowly and steadily improving and we hope that if we don’t hope for rapid development, because we don’t want this to be a very rapid we want to have a slow but constant sort of comeback.”

“Loan growth is clearly going to be associate with the recovery of GDP that’s expected in the end of this year on either side of 2013, and I believe that’s when you going to see loan growth.”

“Volume continued to decline in Greece. The latest austerity package is expected to further reduce disposable income in 2013 while unemployment is the highest in the EU.”

“In Switzerland, the prolonged winter condition compared to last year had an adverse impact on demand”

“In Poland, our performance was affected by extremely cold weather in March and particularly during the week before Easter.”

“We are encouraged by the strong growth across all categories in Nigeria during the quarter. We continue to execute on our strategy in the country, which focuses on investing behind our brands”

[analyst comment] “one of your competitors has said that their expectations for input inflation going forward over a long-term basis is now more mid-single digit, given the demand coming through from emerging markets. My question is, is that kind of your view as well? Or just really, what you bake in to your internal projections over the mid and long term for input inflation overall.” [company response] “Obviously, we do have projections and models, but we are not comfortable with sharing right now any of these estimates. Let me just remind you once again that we had a major component in our input cost baske, which is resin, and this is quite a specific market with a raw material that cannot be hedged. So it would be very risky at this point in time to make calls for mid- to long-term expectations on the input cost growth or otherwise.” [analyst comment] “on Nigeria, the commentary and the good result there in the first quarter is somewhat at odds with the brewing industry has been saying, especially with the high inflation and pressure on consumer spending.”

Below is some balance sheet data from the Bank of Cyprus, which is the largest bank in Cyprus.

With 36B Euro in assets, the bank would barely crack the list of the 50 largest banks in the US, but the bank holds about one quarter of the Cypriot deposits.  I’m haven’t spent much time in the past analyzing Cyprus’ banking system, but looking at this data generally as a bank analyst, a few things stand out.  1) Liquidity is decent compared to many European banks.  The Loan to Deposit ratio is about 92% 2) This is a reasonably profitable bank with a NIM in the 3% range 3) It has more capital than I would’ve expected too given that its effectively written off 2B Euro worth of GGB holdings. 4) The real issue is the quality of the loan portfolio, which is awful on a headline basis.  12% of the loan book is impaired, and almost 30% is past due.  Given that this bank is substantially deposit funded, it would be almost impossible to make it through a storm like this one without depositors taking some losses. 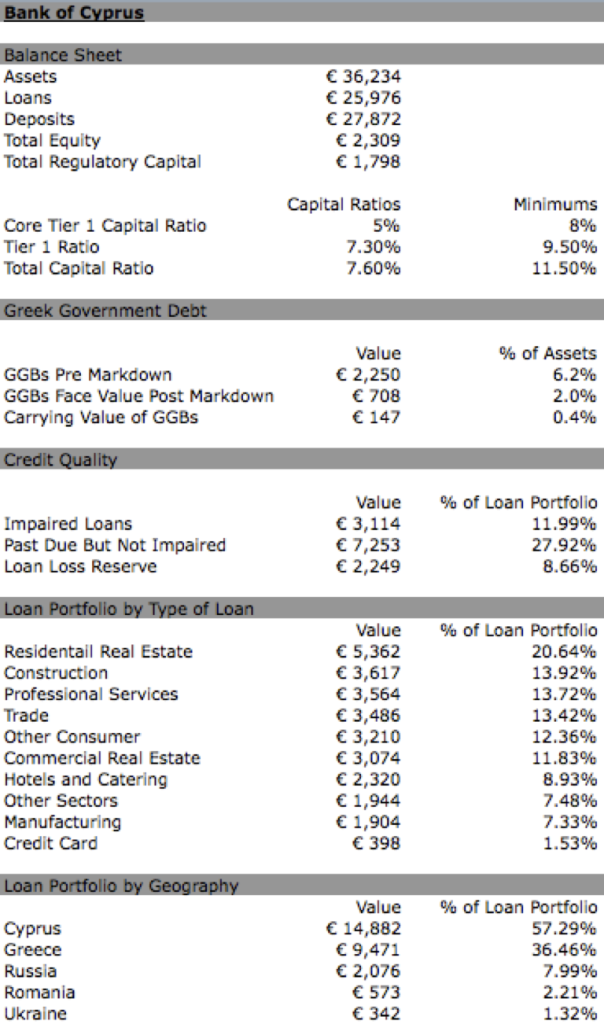