We are taking a look at CF Industries this week, a name that popped up in Avondale’s proprietary quantitative value screen.  The screen looks at historical financial data to potentially identify high quality companies trading at low valuations.  The screen is an important part of Avondale’s investment process, but this post should not be taken as an investment recommendation.

We are one of the largest manufacturers and distributors of nitrogen and phosphate fertilizer products in the world.

five nitrogen fertilizer manufacturing facilities
75.3% interest in Terra Nitrogen Company, L.P.
a 66% economic interest in the largest nitrogen fertilizer complex in Canada
one of the largest integrated ammonium phosphate fertilizer complexes in the United States
recently constructed phosphate rock mine
an extensive system of terminals and associated transportation equipment
joint venture investments that we account for under the equity method

founded in 1946 as a fertilizer brokerage operation by a group of regional agricultural cooperatives.

operated as a traditional manufacturing and supply cooperative until 2002, when we adopted a new business model that established financial performance as our principal objective, rather than assured supply to our owners.

2005, we completed our initial public offering

2010, we acquired Terra Industries Inc. (Terra), a leading North American producer and marketer of nitrogen fertilizer products for a purchase price of $4.6 billion

Expenditures on natural gas, including realized gains and losses, comprised approximately 39% of the total cost of sales for our nitrogen fertilizer products in 2012 down from 45% in 2011. Natural gas costs represented a higher percentage of cash production costs (total production costs less depreciation and amortization)

In our nitrogen segment, our primary North American-based competitors include Agrium and Koch Nitrogen. There is also significant competition from products sourced from other regions of the world, including some with lower natural gas costs. 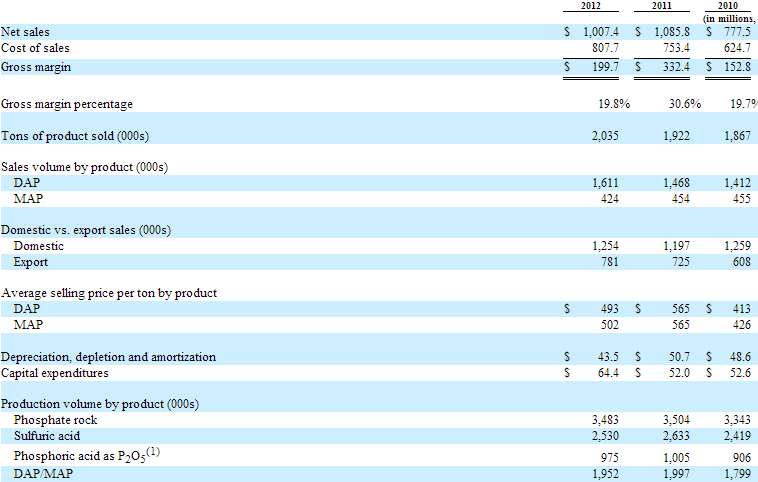 Phosphate rock is the basic nutrient source for phosphate fertilizers. Approximately 3.5 tons of phosphate rock are needed to produce one ton of P2O5

In our phosphate segment, our primary North American-based competitors include Agrium, Mosaic, Potash Corp. and Simplot. The domestic phosphate industry is tied to the global market through its position as the world’s largest exporter of DAP/MAP.

The principal customers for our nitrogen and phosphate fertilizers are cooperatives and independent fertilizer distributors. CHS Inc. was our largest customer in 2012 and accounted for ten percent of our consolidated net sales. Sales are generated by our internal marketing and sales force.

In the fourth quarter of 2012, we announced plans to invest $1.7 billion in an expansion project at our Port Neal, Iowa facility which is projected to be completed by 2016. When completed, this project will increase our annual capacity of ammonia by approximately 0.8 million tons and granular urea by approximately 1.3 million tons.

In November 2012, we announced plans to construct new ammonia and urea/UAN plants at our Donaldsonville, Louisiana complex and new ammonia and urea plants at our Port Neal, Iowa complex. Our Board of Directors authorized expenditures of $3.8 billion for these projects. In combination, these two new facilities will be able to produce 2.1 million tons of gross ammonia per year and upgraded products ranging from 2.0 to 2.7 million tons of granular urea per year and up to 1.8 million tons of UAN 32% solution per year, depending on product mix. The $3.8 billion cost estimate includes: engineering and design; equipment procurement; construction; associated infrastructure including natural gas connections, power supply; and product storage and handling systems.

approximately $886.0 million of our consolidated cash and cash equivalents balance of $2.3 billion was held by our Canadian subsidiaries

We manage the risk of changes in natural gas prices primarily through the use of derivative financial instruments covering periods of generally less than 18 months. The derivative instruments that we use currently are natural gas swaps and options.

Back of the Envelope Math

Company currently trades at 12.2 B market cap.  What is that discounting?

This post is part of a series of posts called “Company Notes.” These posts contain quotes and exhibits from earnings calls, conference presentations, analyst days and SEC filings.

“Total planted area in North America was high in 2013 and is projected to be at a similar level in 2014. We forecast that 92 million acres of corn will be planted in 2014, below the estimated 97 million acres planted this year, due to lower expected corn prices in 2014. However, to provide a bit of context, that 92 million acres would be equal to the most recent 5-year average.

For 2014, planted area for wheat, the second-largest crop for nitrogen consumption, is forecast to be 56.5 million acres, slightly higher than the 2013 planted area. Nitrogen application rates on most crops are expected to increase in 2014 due to lower fertilizer product prices and continued profitable farm economics. Nitrogen use in 2014 is forecast to be 13.3 million nutrient tons for the fertilizer year, a slight decline from 2013, primarily because of lower projected corn acreage.”

“I don’t think you can discount the impact of the potash debacle on the overall market for NP&K. The disruption that, that caused and the — because it was so immediate and big, having an announcement — at the time potash was probably trading at $400 to $420, to announce that it was falling to $300, anybody holding inventory positions, those very quickly became negative positions. And so, with P&K generally trading together and applied together, that then drove distributor positions to just step out of the market, and we saw this worldwide. And then there was a carryover effect into nitrogen.”

“This is my 33rd and final quarterly conference call as CEO of CF Industries.”

“a few lines that sum up Steve’s philosophy include: We are going to do things the right way, and we are going to do what we say and we’re not going to say it until we’re ready. He has created a culture with ethical standards that are a very bright line. Steve has always treated the company’s shareholders, resources as though they were his own and given his Pennsylvania Dutch tendencies, those resources were never in safer hands.”