Over the last year many analysts have learned that the P/E multiple of the S&P 500 depends a lot on the eye of the beholder.  The price component (“P”) of the multiple is clear, but the earnings component (“E”) can vary.  Bulls and bears can each find definitions of “E” that suit their needs.  The spectrum of possible E’s (from most conservative to most aggressive) is: 1) cyclically adjusted earnings (CAPE) 2) as reported earnings 3) operating earnings 4) forward earnings estimates 5) long term potential earnings.

Even if you’ve decided on which “E” to use, it’s still difficult to say what the correct PE multiple should be.  If you try to look at history, options #3, 4 and 5 are all either subjective or modern conventions, so there’s not really a lot of historical data.  Option #2 is highly influenced by economic cycles, which limits its usefulness as a historical gauge.  Option #1 is a little too academic and has other issues as well.

Below I put together a chart of one more measure of “E” which might be helpful in addressing some of these problems.  The chart is the P/E multiple of the S&P “composite” using peak earnings.  Peak earnings are the highest level that earnings had reached at any given time.  Peak earnings adjust for cyclicality because when earnings fall in a recession, peak earnings stay flat.  This approach gives a long term historical perspective, adjusts for cyclicality and is not overly biased by theory.

The peak earnings chart isn’t hugely different from Shiller’s CAPE, but may paint a slightly more accurate story.  Especially since 2000, Shiller’s CAPE has shown a bloated PE multiple, which isn’t totally reflective of reality.  The peak approach shows stocks bottoming at less than 10x earnings in 2009, which is a little more reflective of the risk tolerance in that environment.  Today’s multiple based on peak earnings is 18.7x.  Since 1957 price to peak earnings has averaged 15.5x.  Since 1871 it’s averaged 11.9x.  The S&P 500 would be selling at the average modern level at 1554 and the average historical level at 1193.

(For wonky readers, it’s worth noting that even though this measure of earnings uses “as reported” earnings, it isn’t quite as effected by FAS 142 writedowns as CAPE since FAS 142 write-downs tend to cluster in recessions.) 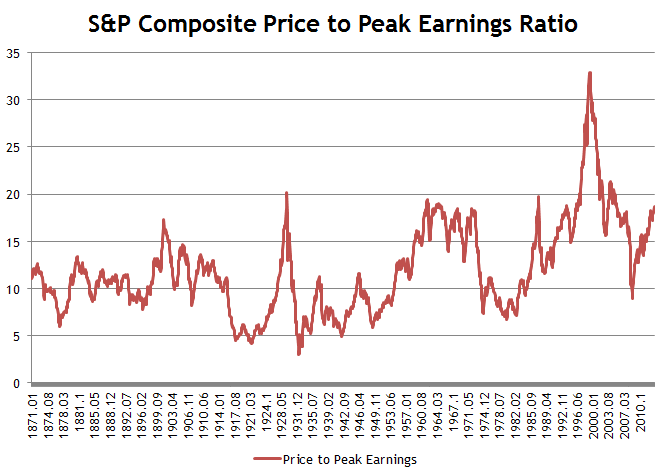