For a value purist, dividends are arguably the most important piece of information in valuing a stock.  In the modern era, we focus on free cash flow and earnings, but in reality, the valuations that we calculate using these metrics are only relevant hypothetically.  They value a company based on what it would be worth to someone who could buy the whole thing.   If you work through the math, all of the multiples that we use as shorthand to value a company only make sense if you actually receive the cash flow.

Few of us are Warren Buffett though, so outside of fantasy land, the only cash flow that you will ever see that is derived from a public company is from dividends. Many value investors wont like to admit this, but everything else–including estimating “intrinsic” value–could technically be categorized as speculation (profiting based on where you think a stock is likely to sell).  Dividend value is the only type of value that is truly agnostic to the opinions of others.

If you want to be a value purist though, good luck.  You will likely have a tough time finding anything to buy.  Depending on the rate of return that you’re looking for, you might be willing to pay around 820 for the S&P 500.  That’s the value that you get from the dividend discount model if you plug in the average dividend yield going back to 1871 (4.4%).

The S&P 500’s current dividend yield is 1.94%, which echoes the interpretation of most other valuation metrics.  Stocks are not necessarily expensive relative to their average value over the last 15 years, but are very expensive relative to long term history.  In past posts, I’ve toyed with the idea that this might be justified–maybe we’re in a new paradigm for value.  But if we are in a new era of structurally higher values, then we have to consider an important result that comes with that.  If stocks are structurally more expensive than they were in the 20th century, can we expect to receive the same rates of return that we did in that era?  If we are leaving the 20th century behind, then maybe we have to leave behind our concept of fair returns on investment.  Dividends are one signal telling us to lower our expectations. 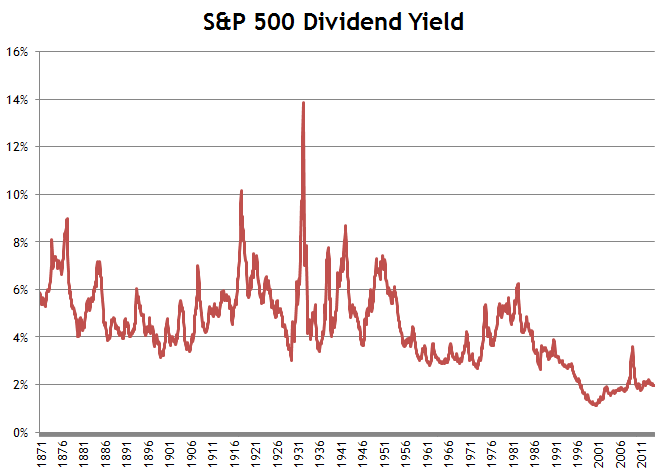