The fact that the two yields are closer than they usually have been in the past could be an indication that equities are still cheap relative to bonds, or it could mean that bonds are just expensive in general.  In either case, one of the more pressing questions for equity valuations is whether or not equities should be priced off of interest rates, especially if rates are low because they are forecasting a low growth, low inflation environment.

Looking to historical precedent for guidance, during the 1930s and 40s, interest rates were comparable to today’s levels, yet the dividend yield on the S&P 500 was much higher.  It ranged from 4%-8%.

On the other hand, in Japan, where interest rates are among the lowest ever observed in history, the dividend yield of the Nikkei was 1.37% as of the end of 2014.  So it’s possible that if US growth and inflation expectations fell even more, the dividend yield of the S&P 500 could continue to fall as well, which would push the price of the index higher even in spite of economic stagnation. 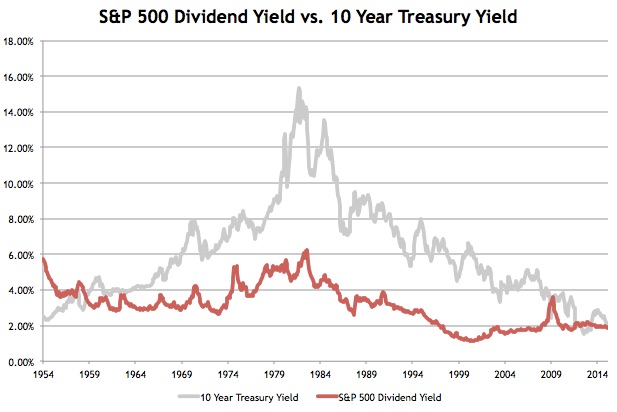