There have been a few comments on retail/apparel earnings calls suggesting that retailers are currently managing their inventories relatively tightly.  Fossil, for instance, said this:

“What we discovered or what we experienced in the second quarter was that both with department stores and some of our boutiques, they were really focusing on managing their inventories tightly. And relative to our expectations, we saw some compression on sales because they were reducing their inventory level.”

TJX echoed that sentiment on its call yesterday

“we are very clean in the stores. In fact, our inventory, well, it’s been lean off season and, given the second quarter with sales picking up, our clearance levels are very under control. No real liabilities there.”

If this is true, it’s a good sign for retail that inventories are under control.  Lean inventories are not only more efficient from a working capital standpoint, but also could help signal that the highly promotional environment that retailers have been complaining about is about to let up. If retailers are more conservative with their inventories, they don’t have to take as many markdowns to clear it.

If retailers are running their ships more tightly it’s not really showing up in financial statements quite yet though.  Below is a chart of a few important retailers’ days of inventory on hand (365/COGS/Inventory) since 2000.  If anything it looks like retail inventories have been trending slightly higher as of late.  For what it’s worth, the Census Bureau’s data shows that retailers’ inventory to sales ratio is above its recession low, but below where it was at the beginning of the year. 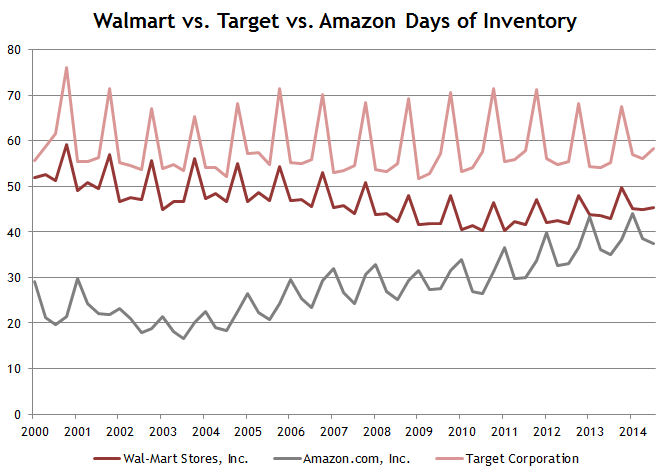