There was a lot of positivity coming from management teams on last week’s earnings calls.  One of the few areas of weakness that I heard anyone mention was from Simon Property Group, which noted that retail sales at their malls continue to be soft:

“As you know, a number of retailers, both low and medium and even high-end, are all seeing somewhat of a cautious consumer. And that certainly is affecting retail sales in our properties.”

This echoes sentiment that was shared by The Container Store a few weeks ago that we’re seeing a broad based retail “funk.”  Both Simon’s management and TCS’ said that it’s not just brick and mortar losing out to online sales either.  Amazon’s share price weakness may help confirm that.

It’s very important to pay attention to weakness in retail, because consumer spending tends to be one of the first areas to lag when the economy is headed into recession.  The retail weakness doesn’t seem to gel with a lot of the other data that I’m seeing though.  Comments from Bank of America and JP Morgan each mentioned that credit card spending on discretionary items was strong.  Suntrust noted that tourism in Florida is going “gangbusters.”

These comments are leading me to gravitate toward another comment that Simon Property Group made about retail: June and July don’t really matter all that much.

“the summer months are not big until late July and August because they’re back to school. June is not an important month. Early part of July is not. So we’ll see what happens”

Is it possible that the reason that retail looks notably weak is just that it’s a seasonally weak time of year for retailers?

This is indeed a weak seasonal time for department stores, which is the quintessential mall retailer.  On the other hand, it’s a strong seasonal time for auto sales, and as we know, car sales have been booming so far this year.  Perhaps this is an indication that consumers are in an all or nothing mode.  We’re bingeing on things that we would normally spend on, and other categories are suffering.  Maybe that bodes well for retailers come Christmas time.  As you can see from the chart, November and December are the months that really matter for retailers’ sales. 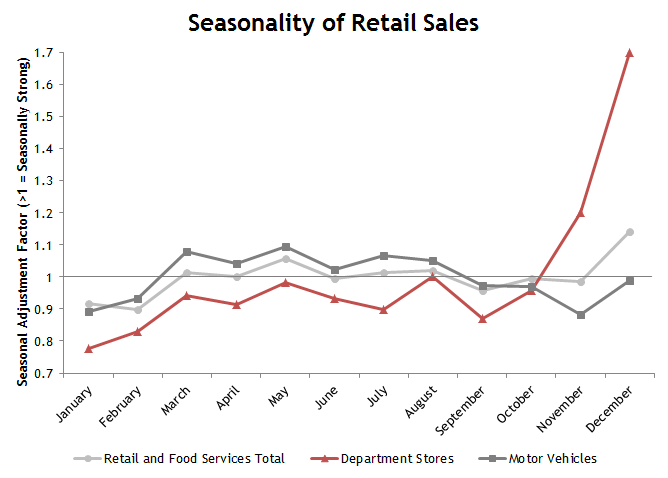