US Federal debt is broken down into two different categories: publicly traded and non-publicly traded.  The non publicly traded debt is typically intergovernmental debt–more specifically it is debt that is owed to Social Security.  Those who are less concerned about Uncle Sam’s debt situation tend to write off the intergovernmental debt and exclude it from Debt to GDP calculations.  This is why you may have seen widely variant accounts of what the US Debt to GDP ratio is.

It’s getting problematic to hide this debt though because the last few years of deficits have been mostly financed by floating new tradable debt.  The chart below shows publicly traded debt as a percent of total Federal debt.  Prior to 2008 the ratio was about 50/50.  Today Federal debt is nearly 70% publicly traded.  This is concerning because it’s obviously more difficult to control publicly traded debt.
The other issue is that as the Fed extends its maturities more and more, the maturity profile of the truly publicly floated debt becomes shorter and shorter.  Short term funding is what causes banks to be susceptible to bank runs and was the primary point of failure for Bear and Lehman. 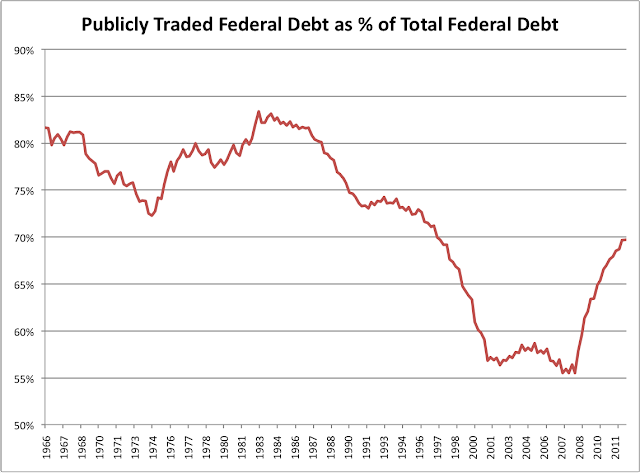