Below is a chart of Olympic medal count plotted against GDP of competing countries.  Looking at the leader-board, it’s fairly obvious that wealthier countries tend to do better (US #1, China #2).  By plotting the data though, you can see which countries “outperformed” their wealth level.  Generally, countries above the line did better than their wealth level would imply while countries below the line did worse, but the trend line gets a little skewed by high wealth countries and the logarithmic scale. 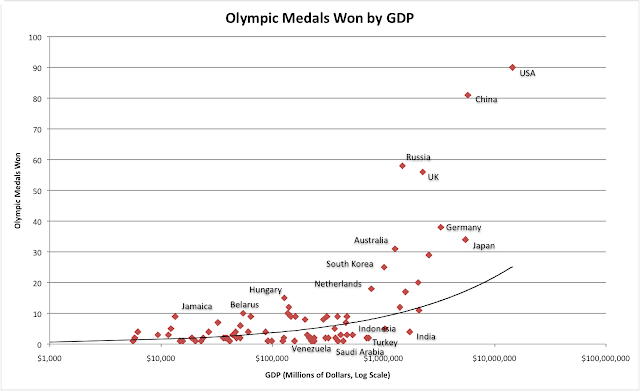 For more granularity, below is a list of outperformers and underperformers measured by GDP rank minus medal rank.  For example, Russia has won 58 medals in the games, and is therefore in 3rd place in medals.  In terms of GDP it is ranked 11th in the world, so it outperformed its GDP rank by 8 spots.  By contrast, Saudi Arabia has the 23rd highest GDP in the world but only won one medal, tying it for 65th place.  Therefore Saudi Arabia underperformed its GDP rank by 42 spots. There were 205 countries participating in the games and 784 medals awarded so far.  80 countries have won medals. 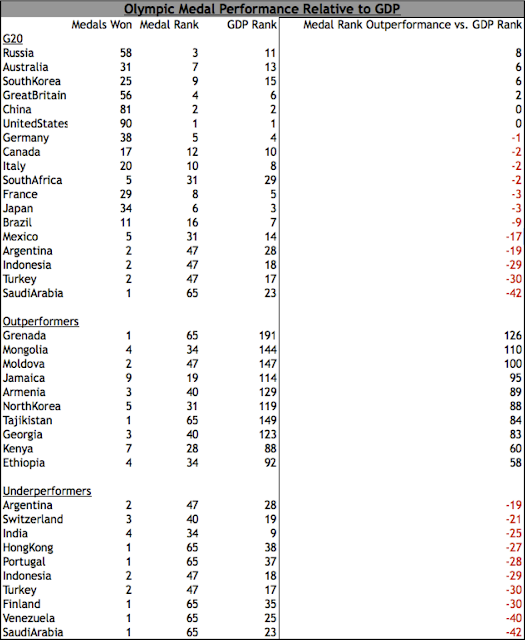