Despite concerns about the fiscal cliff, it should be encouraging to investors that bank stocks have held up quite well over the last couple of months.  It seems that sentiment may have finally turned for the group, especially for Bank of America, which regained the $10 level yesterday yet still trades for a little over 50% of book value.

The banking system has healed a lot since 2008 and profitability has almost returned to old highs.  However, non-performing loans remain piled on US banks’ books and probably will stay there for years to come.  According to recent FDIC data, non performing loans (NPL) as a percentage of all loans at FDIC insured banks are still higher than they were at the peak of the S&L crisis.
While it’s an interesting data-point, this isn’t necessarily cause for alarm because NPLs are supposed to be written down to fair value when they go to non-accrual status.  This means that as long as housing prices remain stable, these loans probably wont have to be written down any more.  Also, just because a loan is marked as NPL doesn’t mean that it’s not still paying.  In fact, many of these loans are probably still generating cash flow for the banks that hold them. 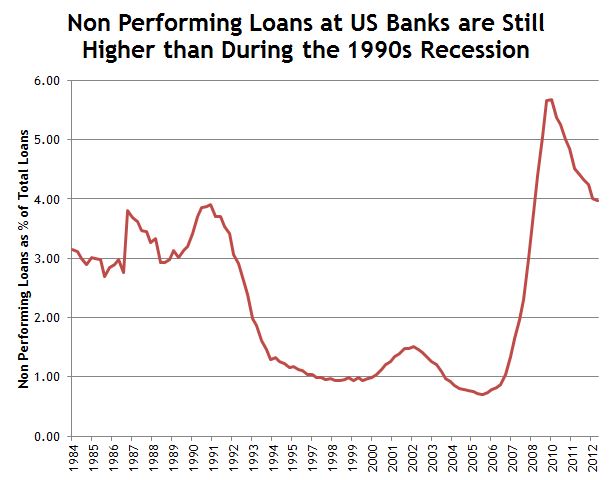