Tesla is now down 38% from its peak and appears to be suffering the same fate as many other momentum stocks before it.  In order to help chart what $TSLA’s decline could look like, below is a list of the number of weeks that it took 11 other broken momentum stocks to lose 50% of their value from their peak.

It took these stocks 12 weeks on average to lose half of their value.  If Tesla matches that pace it could be below $100 by mid December.  On average, these stocks lost 91% of their value before their declines were over and the average duration of decline from peak to trough was 100 weeks (about 2 years).

Of course for every example here there is probably another example of a momentum stock that appeared to break but then recovered.  Chipotle and Monster Beverage are two that come to mind that came close to 50% declines before recovering.  Indeed, several of the stocks on this list (Netflix for example) have recovered quite a bit from their drawdowns.  In the end though, valuation always wins.

Related reading: Where do growth stocks peak?; Anatomy of a Short Squeeze 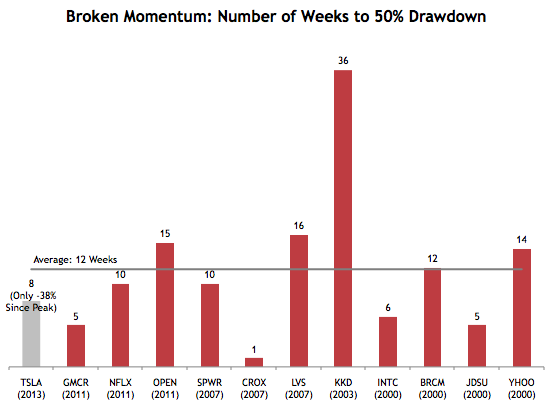 4 thoughts on “When Momentum Stocks Break”