The preliminary Michigan Consumer Sentiment reading for August came in at 54.9, which is the lowest it has been since 1980.  The number is significant for a couple reasons 1) It’s lower than it was during the 08/09 recession 2) It’s the first economic reading that we get for August, which doesn’t bode well for the rest of the month’s economic data.

The other times Michigan confidence was this low were in November of 2008 and March of 2009.  Recall that the S&P 500 bottomed in the 700s in November 08 and had a 30% rally from there through the end of December before hitting a longer term bottom in March of 09 at 666. 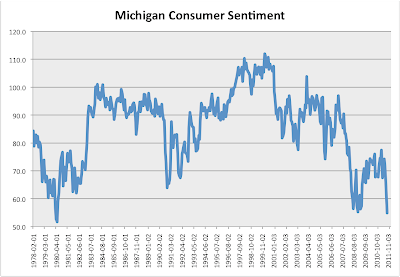