The Swiss Franc (CHF) is trading sharply lower today against the dollar on news that the Swiss National Bank is considering a “temporary” peg of the currency against the Euro.  However, the move shouldn’t be too surprising to the market as the SNB has been trying to manage the CHF/EUR exchange rate aggressively for the past several years.

These aggressive actions have had a significant effect on the SNB’s balance sheet and, by extension, the assets which back the CHF.  Today, a large portion of the assets which back the CHF are EUR denominated, indicating that a “soft” peg has been in effect for some time.  (After all, a currency peg is executed by a central bank standing willing to purchase foreign currency in exchange for local at a fixed rate.)

Since 2009, the SNB has been heavily buying EUR in order to manage the exchange rate.  Foreign currency reserves now represent nearly 80% of the SNB’s balance sheet: 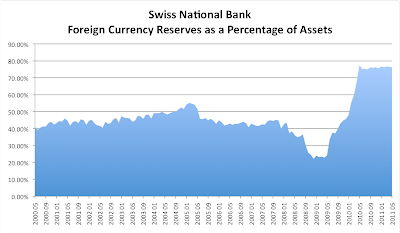 The bulk of the buying has been of EUR which now represents 56% of the currency reserves, or 42% of the aggregate balance sheet. 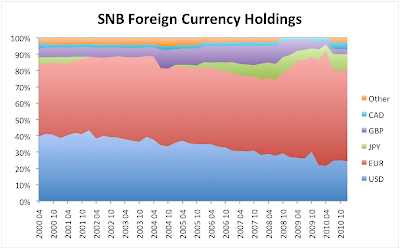 During the Eurozone crisis, the CHF has benefitted from a flight to safety trade.  However, a careful inspection of what the central bank holds against CHF suggests that perhaps investors are simply moving assets from the left hand to the right.  If 42% of the “safe” asset is backed by the “risky” asset, then how safe can that asset really be?