If you’re looking at forward earnings estimates, you might notice that analysts are expecting a fair amount of growth over the next few quarters.  Assuming no big surprises between now and the end of earnings season, it’s likely that the S&P 500 grew earnings by about 5% year over year in 3Q13, which is more or less the same growth rate that has prevailed for the last three quarters.  However, analysts are expecting earnings growth to pick up in 4Q13, jumping to 10% over last year and remaining at a double digit growth pace through 2014.

It’s tough to say for sure what’s driving those assumptions (I tried to give a bottom up view in August), but if you extend a 5% growth rate over the next 5 quarters, the earnings picture looks a little different than the current estimates.  Instead of $109 estimate for 2013, the number would drop to $108, and for 2014 the current estimate of $121.50 would fall to $115.97.  For reference, this time last year analysts were projecting 2013 earnings would come in at $114.61, so a $5-$6 overestimation wouldn’t be unheard of. 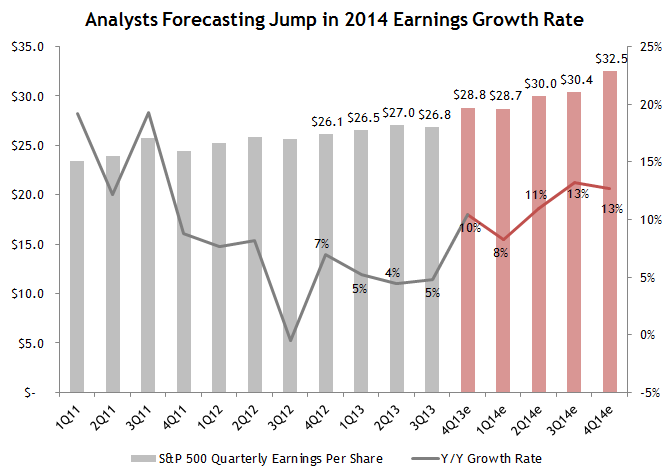 2 thoughts on “How Reasonable are 2014 Earnings Estimates?”