Even though Bank of America is trading lower, today’s quarterly release capped off what was a surprisingly good quarter for major US Banks.  In general, loans and deposits both showed growth, capital levels are extremely high and credit quality is significantly improved from where it was during the crisis.  Similarly, the housing sector has had some healthy reports as well recently (see previous post).

Seeing as how housing and banking were at the epicenter of the previous crisis, what does the fact that the two sectors are recovering say about where we are in the current economic cycle?  To try to help discern how this cycle compares to previous cycles, below is a chart comparing the performance of housing (ITB) and Financials (XLF) in this cycle to Technology (XLK) in the last one.  The chart shows relative performance of ITB, XLF and XLK compared to the S&P 500.  ITB and XLF are shown from 2006 and 2012 and XLK is shown between 2000 and 2007.

After the sharp collapse of technology stocks relative to the S&P from 2000-2002, XLK languished on a relative basis for the next four years before finally starting to outperform in 2006.  Similarly, both XLF and ITB showed steep drops and have continued to be losers since.  Now, years later, they may finally be starting to show signs of a turn.  XLK continued to steadily outperform the S&P 500 through 2012.  However, by the time XLK turned in 2006, the general economy only had one year left before it began to contract. 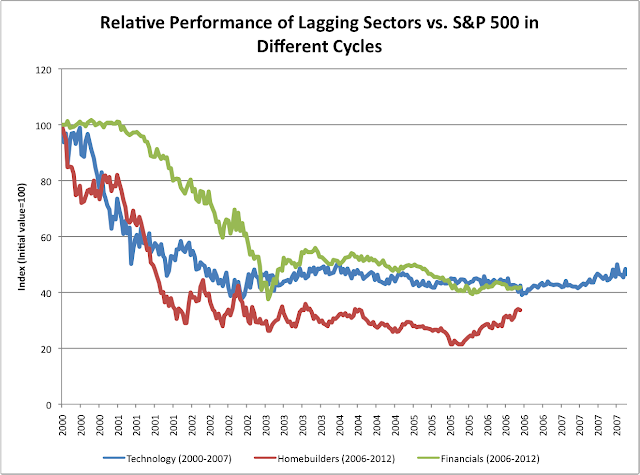