The Federal Reserve’s Flow of Funds report was released yesterday, and it showed that the US economy continues to re-leverage.  We never really saw a de-leveraging though, since the total amount of credit market debt outstanding never actually shrunk in any given year.  Consumers have de-levered modestly–we collectively carry $12.9 T worth of debt today versus a 2008 peak of $13.8 T.  However, the Federal Government has accumulated so much debt in place of consumer borrowing, that the total debt stock hasn’t gone down.

In fact, the amount of debt that the Federal Government has accumulated over the last 5.5 years is getting fairly close the the amount of debt that was accumulated during the consumer credit boom in the last cycle.  The Federal Government has borrowed $6.6 T worth of marketable debt in 5.5 years.  In comparison, consumers borrowed $7.3 T in the 8 years leading up to the financial crisis.

It’s tempting to think that there hasn’t been the same credit boom in this cycle as we’ve seen in previous cycles.  In a sense that’s true for consumers and businesses, but it’s not true for government.  There’s been a big credit boom this cycle, just not in a private economic sector. 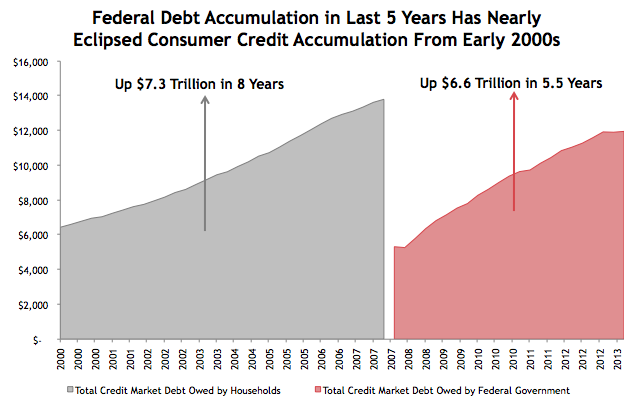