Near the midpoint of the month, the Dow is currently up 1.78% for September.  If the index holds up and ends September in the green, it will mean that the average has risen in 8 out of 9 months in 2012 (although the S&P was negative in April, the Dow eked out a slight gain).  What would it mean for the Dow to maintain such a high batting average?

In 112 years of Dow history since 1900, the index rises in 6.8 months per year on average.  In other words, the Dow posts positive returns in a little over half of all months.  Since the Dow has already risen 7 months this year, the Dow would have to post negative returns through the end of the year in order to keep pace with the average.

Looking at history it’s not at all unusual for the Dow to rise in 8 or even 9 months of the year, but beyond that the frequency begins to wane.  The Dow has never risen in all 12 months of any year and has only risen in 10 or 11 months 9 times out of 112 years.  The last time the Dow rose in 10 months of the year was 2006. 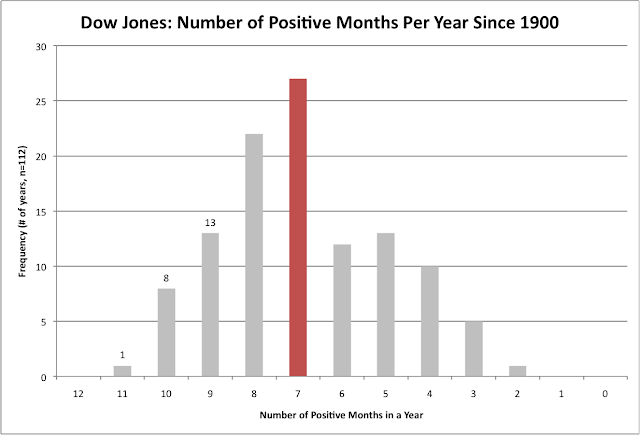