At some points it didn’t look like we would make it, but thanks to a strong last couple of days, the Dow rose in the month of April for the ninth straight year.  If it rises again next April, it will be the 3rd longest calendar month streak in Dow history going back to 1900.

Interestingly, July has a history of generating streaks of positive seasonality.  The Dow has put together four separate streaks of positive Julys, and three of those occurred in a linked time-frame.  As a result, between 1924 and 1959 the dow was positive in 28 out of 36 Julys.

For those of us who pay attention to seasonal patterns it’s worth noting that certain seasonal anomalies can appear to persist for decades at a time without much confirmation as to whether they are real or simple superstition.  April has only been negative 4 times in the last 20 years, so if you’re under 50, it may seem like a strong April is fait accompli, but there’s never been a streak of Aprils better than this.  If you were an investor who started in the business in 1924, you may have gone your whole career thinking that a strong July is something that you could set your watch to.  For 15 of those years, August was strong too.  Investors in that era probably didn’t worry too much about selling in May. 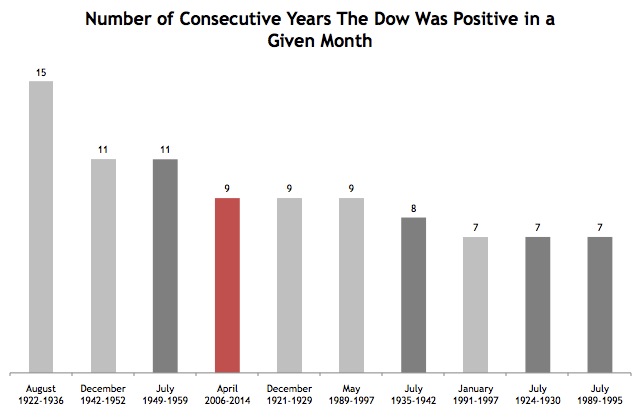