A few days ago I wrote an article on gold and the monetary base posted at Seekingalpha.  One of the comments received there was a request to relate the expansion of the monetary base to banking losses sustained as a result of the credit crisis.

I don’t have that exact data, but I remembered that yesterday I did post an overview of banking sector data from the FDIC.  As part of that entry, I included this chart on quarterly charge-offs and provisioning: 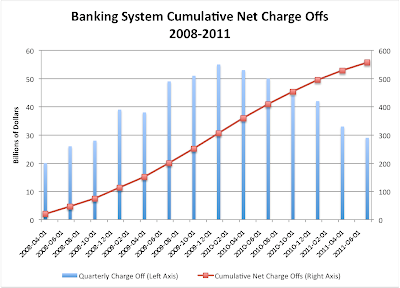 In 1Q08 there were $7.96 trillion worth of loans on bank balance sheets, which means that total net charge offs have been approximately 7% of outstanding loans since that date (not adjusted for new originations).  Of course the total economic losses are greater than $556B because these losses only account for non-securitized loans (and don’t include Fannie and Freddie).

Losses from securities no doubt eclipse losses from the loan portfolios; however, it’s more difficult to determine what securities losses were incurred because cash flows were interrupted and which were paper losses.  The nice thing about the net charge-off data is that it is restricted to assets which went bad because the borrower was delinquent.