One positive takeaway from Apple’s earnings call yesterday was that the company showed very strong gross margins.  Management acknowledged that the gross margin strength even surprised them:

“it was obviously a surprise also to us…we were expecting some cost improvements. These cost improvements came in. They came in stronger than we were anticipating. The commodity markets continue to be favorable, the product quality continues to be excellent, our teams executed really, really well. And all these things came together at the same time and it was a very nice surprise for us.”

Apple’s gross margin for the quarter was 39.4%, a very solid number, but in the long term there might be reason to believe that $AAPL’s gross margin could be substantially higher.

When you compare Apple’s gross margin to other branded consumer products companies, Apple’s margin looks relatively slim.  Companies like Nike, Procter and Gamble, and Coca Cola have 45-60% gross margins.  Luxury brands like Coach and Burberry have gross margins in the 70% range.

It may seem like a stretch to compare Apple to apparel, toiletries and sugar water companies, but in the long run there may not be a whole lot separating the two.  At its core Apple is a brand that sells a potentially commoditizable (see: Acer, Lenovo) product to people who will pay a premium for aesthetics, exclusivity and quality.  Other branded consumer products companies show that the value of a brand may be a gross margin in the 55% range.

One of the reasons that Apple does not have as high of a gross margin could be that the technology industry is still relatively young, so components have not become as commoditized as they might eventually become.  However as innovation slows, lower value unbranded components are likely to have trouble defending their margins, which allows a branded company like Apple to take those margins for itself.  In a time when it wasn’t so easy to produce cotton or leather, these apparel companies may not have been able to achieve such high margins either. 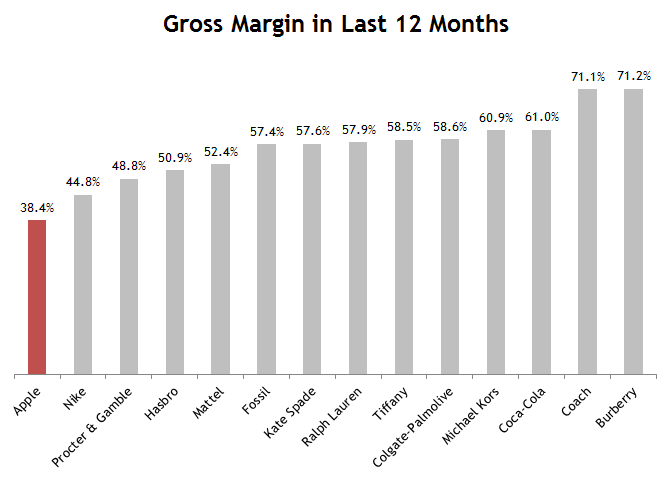