Ever since equities bottomed in 2009, stocks in the consumer discretionary sector have outperformed the S&P 500 by a large margin.  $XLY, an ETF whose largest holdings are Amazon, Comcast, Disney and Home Depot, has quadrupled since 2009 while the S&P has not quite tripled over the same time frame.  In the last couple of months though, stocks in the consumer sector have been a little weaker than the broad market.  In particular, retail shares ($XRT) have underperformed pretty significantly since December 2013.  The broader sector, represented by $XLY has held up better, but has faded somewhat since the beginning of the year.

Two months is definitely not enough to declare a trend, but this is something worth keeping an eye on.  Consumer discretionary tends to lead into a recession, so if the sector is fading, it could be a sign that a storm is brewing. 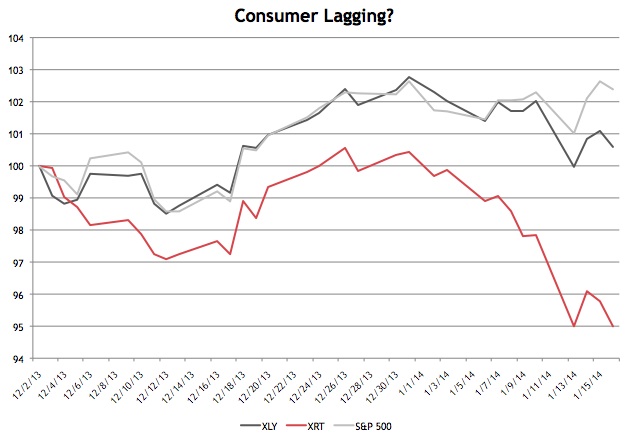