$TSLA continues to be the bane of its short seller’s existence, up 20% today after reporting earnings.  The market cap is now over $7 B, which is astonishing considering that it only sold 5,000 units last quarter.  The company is aiming for 21,000 units worldwide this year, which means that the company now sells for $360,000 per projected 2013 vehicle sale.

For comparison, below is a chart of the market value of other global automakers relative to the number of vehicles that they sold in 2012.  Tesla sells for 13x Daimler on a per vehicle basis, which is the second most expensive company per vehicle at ~$28,000.  The average mass market automaker like $F, Volkswagen and Nissan seems to sell for about $10,000 per vehicle.  Honda sells for less because the majority of its vehicles are motorcycles.  $GM’s figure is lower presumably because of its balance sheet.  I couldn’t quite figure out why $TM seems to sell at such a premium based on this ratio.

Needless to say Tesla’s stock is pricing in a significant amount of growth.  If you assume that the company can match the margins of the rest of the industry and that the stock gets a premium valuation of $20,000 per vehicle (in line with Daimler and BMW) then the current market cap implies that Tesla will reach a point that it’s selling about 380,000 vehicles per year. Is that doable? In a 78m unit global auto market, it certainly could be.  But is it doable without hiccups? Most likely not. 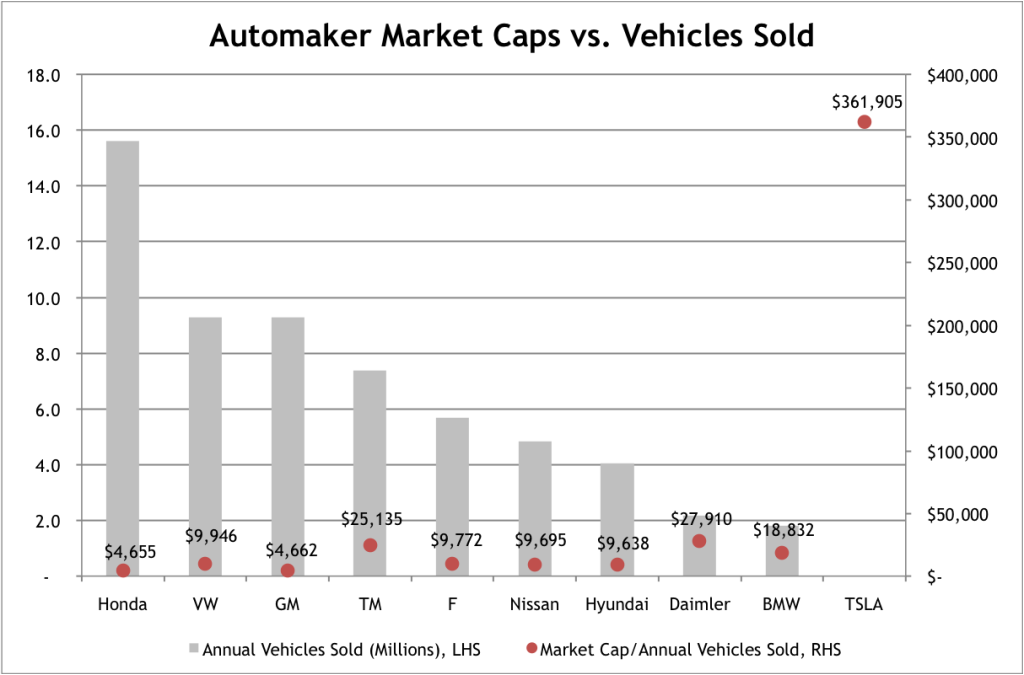 One thought on “Comparing Tesla’s Market Cap to Other Automakers”