Vikram Pandit unexpectedly stepped down from the head of Citibank today, which caps off a troubled run.  Pandit was thrown into an impossibly difficult situation on December 11, 2007, but it’s tough to say that his time as CEO was successful.

Under Pandit, Citi’s shares lost 88% of their value, which is the worst performance of any large bank that’s still standing.  While there’s not much that Pandit could have done to prevent the decline, he may have been able to mitigate it if he had controlled the dilution of his shareholders a little better.

Many may not remember, but Vikram Pandit allowed Treasury to convert TARP money from preferred to common shares on February 27, 2009, just days before the market bottomed.  It was the only major bank that did so at that time.  We may never know to what extent he was forced to do this, but we do know that Pandit himself was the one who caused the bottom in the stock market only 10 days later.  He sparked a massive rally when he quietly leaked that Citi had been profitable for the first two months of the year.  Why did Pandit subject his shareholders to such heavy dilution when things were so much better than the market realized?  Sadly, Citi shareholders may never know. 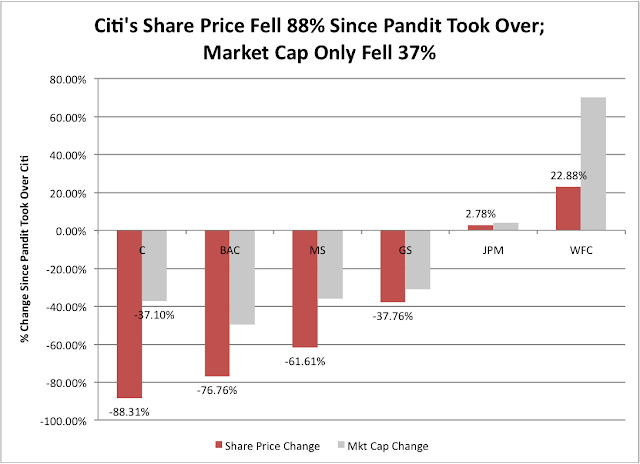