The market is still basically flat since the start of the year, and especially in recent days, stocks have drifted lower. The trading pattern looks more like a lack of buying support than an influx of selling pressure and could be a sign that buyers are running out of dry powder.  Bulls have long argued that there is a lot of cash “on the sidelines” that could be reallocated to equities and push markets higher.  Below is some data to try to quantify if maybe there aren’t as many buyers left on the sidelines as there used to be.  The chart shows how much cash US households are holding as a percent of their total financial holdings.

You can interpret the ratio in two ways. 1) a reflection of how much cash households have chosen to hold relative to other investments  2) a reflection of the buying power of the cash relative to the current price of stocks.  The chart below captures both an asset allocation decision and a valuation component because cash-percent falls when other securities prices rise.

From an asset allocation standpoint, households now hold 14% of their financial assets in cash.  This is a level that was first reached in mid 1997 and once again in mid 2004.  The lowest level ever reached was 12.1% in 1999.  This implies that households are relatively fully invested, but could put about 2% more of their assets into the market.  This metric captures what people are talking about when they say that sentiment is nothing like what it was in the late 90s.  That extra 2% cash is the difference between your cab driver giving you hot stock tips and the general population being relatively indifferent to what the stock market is doing.

From a valuation perspective, the chart does seem to echo the conclusions drawn by other metrics.  Households’ current cash holdings buy a smaller amount of financial assets than at any other time outside of the dot com bubble and parts of the 2003-2007 rally.  In order to be bullish on equities from here, you really have to believe that stock prices are headed back to bubble levels not seen since the dot com days.  This would coincide with all time low levels of asset allocation to cash.  Interestingly, if you invert the chart, you may notice that it looks somewhat similar to Shiller’s CAPE. 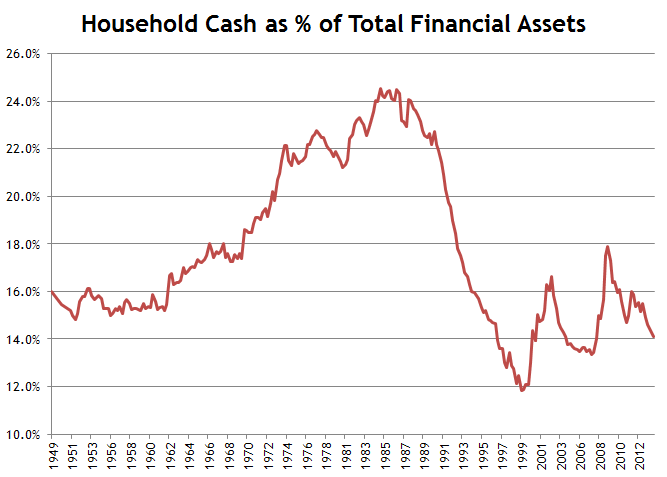