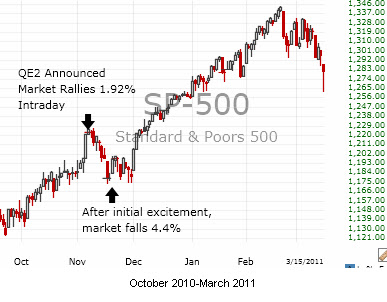 Consensus seems to be growing that the Fed is definitely going to announce some sort of new QE today.  From an academic standpoint QE is supposed to lower interest rates in order to spur lending and economic activity, but as a reminder the last two times that there have been unsterilized printing programs rates have actually risen because QE has created the appearance of inflation.  Only operation twist, a sterilized maturity swap program has been effective at flattening the yield curve.  Below is a chart of the 10 year yield with QE dates highlighted. 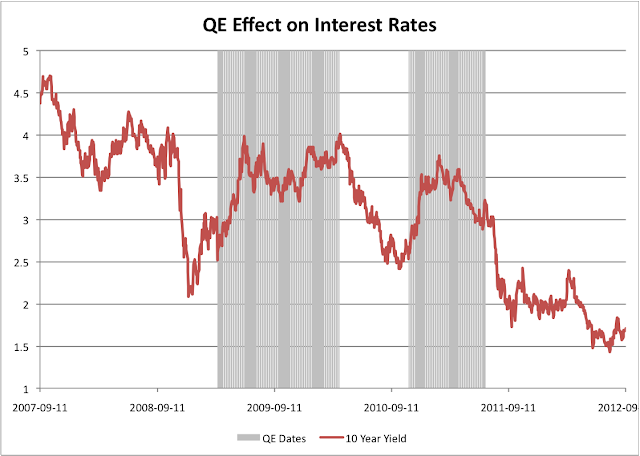 Given that Mario Draghi announced unlimited asset purchases last week, equity markets have been rallying along side the Euro; however, if Draghi ends up exercising his buying power and Bernanke doesn’t announce more QE tomorrow, the Euro rally may be short lived.  Since 2009 (as theory would predict) the value of EUR/USD has been closely linked with the relative size of each central bank’s balance sheet.  The more that the Fed prints, the more the EUR gains against the dollar.  The more the ECB prints, the more the EUR falls against the dollar. 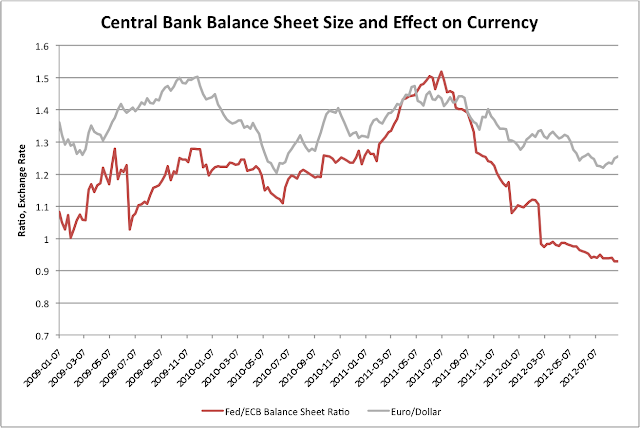 Recently following two sizeable LTROs the ECB balance sheet has grown significantly to eclipse the Fed balance sheet (in nominal fiat/local currency terms).  The balance sheet would likely expand even further on new outright purchases.  This implies that there could be further downside for the Euro, unless Bernanke acts to counteract.
The ECB’s newfound willingness to expand its balance sheet introduces an interesting game theory aspect to US monetary policy that wasn’t as prominent in 2009/10.  If Bernanke wants a weak dollar relative to other global currencies, he may be forced to act further.  Otherwise we could be looking at a much stronger dollar along with the anti-correlated equity prices that come with that.
Of course, who cares if the numerical value of the S&P falls if the dollars that measure its value are worth more?  Depending on his actions, Bernanke might.