Eating at home has gotten cheaper

“But the hamburger sub-segment has been flattish. And I do think this food at home versus food away from home gap does impact it…it’s gotten a lot more cheaper relatively speaking to go get fresh beef at your local butcher and go home and grill it. So that does have a bit of an impact.” Todd A. Penegor – President, Chief Executive Officer & Director

“the cost of eating at home versus the cost of eating in the restaurants, it’s about 3x delta. And when a consumer is a little uncertain around their future and really trying to figure out what this election cycle really means to them, they’re not as apt to spend as freely as they might have even just a couple of quarters ago. And it’s at a time where we’re still not seeing real wage growth, but we are seeing some of the cost of living move up when you get into what does it cost to own an home and operate your life in general. And there is a little bit of tightening on the disposable income, especially on the low-end…And that’s why we’re investing so much back into our food to really make sure that we widen the quality gap…we want to create a new QSR experience at traditional QSR prices and that’s why we think we’re uniquely positioned to win in this environment.” Todd A. Penegor – President, Chief Executive Officer & Director

“The decision to divide up the New York market is consistent with our strategy to maintain restaurants in different parts of the country and with various demographics to reflect the diversity of our marketplace and to maintain the scale necessary to be operationally efficient where geographic concentration allows. System optimization is all about building an even stronger system and serving as a catalyst for growth by putting restaurants in the hands of strong operators who are committed to driving new restaurant development and accelerating reimaging.” Todd A. Penegor – President, Chief Executive Officer & Director

Little to moderate change in annual rate of activity growth

“The annual rate of activity growth had remained moderate and little changed in the month up to the EU referendum. Consumer spending and construction output growth had eased a little, offset by a pickup in manufacturing growth from a low base. There had been further signs of uncertainty leading to delays in decision-taking, including on capital spending, hiring and property investment.”

Businesses weren’t prepared for the Brexit

“Many contacts planned to undertake strategic reviews of their operations over the coming months in light of the vote. For many, the result of the referendum was a shock; few had contingency plans and so for the time being were in a mode of seeking to maintain ‘business as usual’.”

“As yet, there were few suggestions of disinvestment, such as exiting the United Kingdom in the near term, but there were a few reports of planned foreign direct inward investment being postponed. A number of companies were considering alternative European locations for aspects of their business, and some contacts within large international firms expected their continental European operations to receive a greater share of future investment than their UK ones.”

A ´risk off´ approach in the near term for firms

“The outlook for investment was uncertain. The majority of firms spoken with did not expect a near-term impact from the referendum result on their capital spending. But around one third expected some negative effects over the next twelve months, with reports of a ‘risk off’ approach to

expenditures and some imminent plans for spending slipping.”

“There had been little evidence of any impact on consumer spending on services and non-durable goods, although there were some reports of consumers becoming more hesitant around purchases of higher-value goods.”

“As yet, there had been few reports of major alterations to businesses’ employment intentions. But the vote to leave was expected to have a negative effect overall on hiring activity over the coming twelve months.”

Prices expected to rise but may not be passed to consumers

“Companies’ prices were likely to increase, as the fall in sterling passed through to higher import costs …Given intense competition, retailers reported seeking to minimise increases in consumer prices, with a view to protecting their market share. But in some services, such as catering, there were expectations that prices could rise relatively quickly.”

“But the early evidence indicated that banks’ appetite to lend had been maintained following the referendum decision. There were reports that demand for credit was easing alongside lower expectations for investment spending.”

An interesting take on the world economy from Rick Goings, CEO of Tupperware, an extremely global company:

I spent a lot of time this last month doing not only big group but one on one meetings with the investment community, not only in the United States but more and more focusing on Europe where people tend to hold longer. And but one of the key questions I’m asked almost everywhere I’m, is people want to tap into what are we seeing out there and what do we hear out there?
They understand that the bulk of our sales and profits are outside the U.S., which by the way is only 5% of the world’s population and this is an important question because the perspective one has, if they are getting their news from Wall Street Journal, Financial Times, CNBC or even many U.S.-based analyst reports, one would think that the world is in chaos and it’s bleak out there.
And yet, we just did a review and quite frankly, our perspective is there’s more firm places, more (inaudible) firm out there in the world and things look pretty good and look better than we’ve seen in years. Here’s a brief scan.
In Europe, contrary to what you may read, Europe is not going to fall into the Mediterranean, although it sells newspapers. Politicians there are showing a never before level of commitment and flexibility as they work to hold euro land together. And they are driven by two major things, the desire for peace and economic necessity.
But I do the review and I say well, CIS under Putin, Medvedev, Russian style but it works and we feel good. Nordics look good, Germany looks good. We get down into Turkey, looks good. Greece, who cares, it’s too small, Italy, 66 governments since the Second World War, its stability Italian style.
And then we turn it up, Benelux looks good and it is interesting in France, even under Holland, an interesting perspective. Most of the dramatic changes in governments with regard to repositioning government spending to be less happened under mid land who was an extreme left wing. So we, because he had the ability to bring the assembly within, so I feel, okay, about Europe.
Turning to Latin America, a few topline points in major markets, I already mentioned about the PRI in Mexico. So I feel good about that. In Venezuela, it appears Chavez’s grip is slipping, plus he’s sick, Brazil, fifth largest population in the world, sixth largest economy in the world and a real bright future.
In Asia, finally, 40% of the population, China, India, Indonesia and the driving force is going to be the explosive growth of their middle class, which is going to move from $500 million to $1.7 billion by 2020. In each of these markets, importantly, we have been awarded the status Superbrand. This is interesting, because we’ve never advertised.
Now, I know when somebody reads the recent talk of China’s economy slowing, two things are important to remember. Number one, it’s still growing at 7.5% and number two, the government which is very directive has been proactive with the stimulus and matter of fact, they cut the borrowing rates to stimulate the economy twice in one month.
So, net-net, before I turn it over to Mike, a final thought. When you put it all together, we’re confident in our portfolio and our future. We’re not going to hit on all cylinders in every quarter.

Looking at the bigger picture, retail sales growth has slowed to just a 3.8% y/y increase in June.  The slowing trend doesn’t necessarily indicate recession, but certainly demonstrates that the rapid growth phase of the economic cycle is over.  As recently as this time last year retail sales were up 9.2% y/y, but  now it looks like there isn’t the same slack in the economy that there was then to generate large growth numbers. 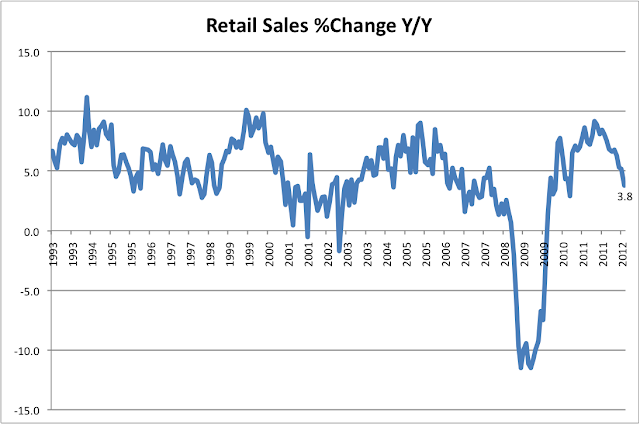 Reposted here from zerohedge is a stunning chart of cumulative flows to bond and equity funds since 1996.  It shows that total fund flows into equity funds are negative over the last 16 years.  Considering that US households have saved $5.4T over this time period (according to the BEA), the fact that equity funds have not seen positive inflows is staggering. 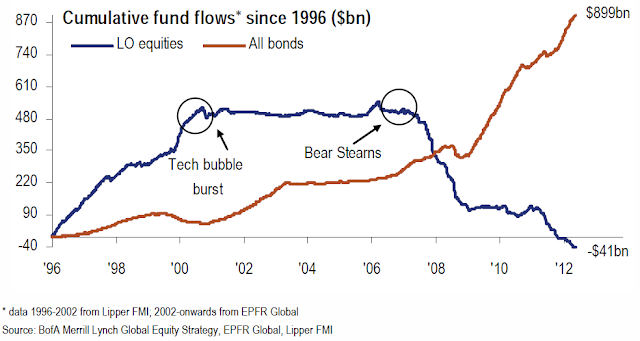 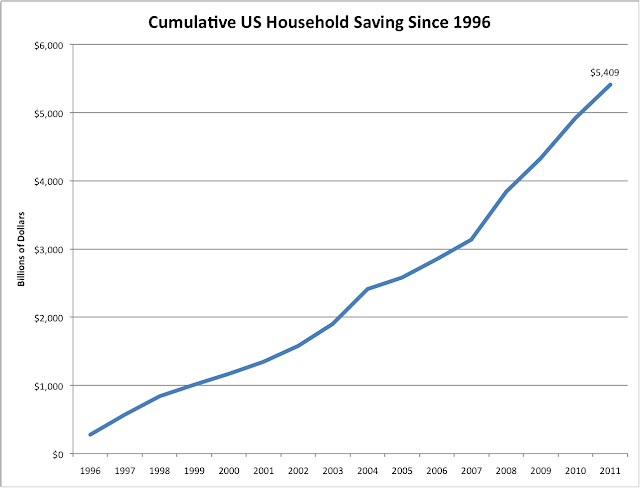