I’ll be in Portugal this week checking out the Portuguese economy first hand.  During the trip I’ll be posting some macro notes on the country and the European financial crisis.

Back in 2011, Portugal received a €78 Billion bailout from the ESM, the EFSF and the IMF, which is a gigantic number relative to the size of the Portuguese economy.  Below are some figures to help put the size of the bailout into context.  €78 Billion is 50% of the country’s annual GDP, equivalent to the US receiving an $8 Trillion bailout.  It is also enough money to fund the Portuguese government’s budget deficit (€11 B) for seven years.  In the context of the country’s financial system, €78 Billion is enough money to absorb a hypothetical 40% loss rate on a 30% delinquency rate on €667 B worth of credit outstanding across the entire economy.

Clearly relative to the size of the real Portuguese economy, the bailout was extreme, but relative to the size of the liquidity crisis, it was a reasonable dose.  That’s because between 2011 and 2015 the government had €75 B worth of debt to refinance, which should have been simple enough in a normal environment, but might have been impossible if locked out of the capital markets.  The bailout effectively refinanced the debt for them.  The European crisis, like the US financial crisis, was more a question of liquidity than an issue of solvency.  Even the most insolvent institution can survive as long as it has liquidity. 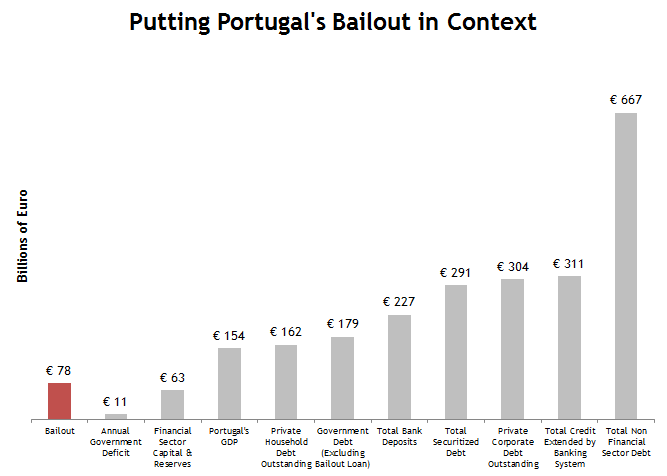