Bank of America’s stock is up 4% today after the company agreed to settle a lawsuit with the Justice Department for $17 B.  That’s a lot of money, but really just a flesh wound for Bank of America, which has $170 B in equity on its balance sheet.

This lawsuit is thought to be the last major crisis era penalty that $BAC will have to incur, which means that from here on out, shareholders will hopefully get to judge Bank of America based on its underlying profitability.  Even in a difficult banking environment, that profitability is quite significant compared to BAC’s current market cap.

BAC generates a similar amount of revenue to its peers, but, at the moment, much less net income.  That has more to do with legal settlements than operating expenses though.  If legal costs get placed in the rear view mirror, BAC’s margins will rise.  Margins may not get all the way to Wells Fargo’s, but it’s difficult to see how BAC could generate only 1/3 the profit with the same amount of revenue.  Banking is a very competitive business, which makes it extremely difficult for any one competitor to have much better margins than another.  If Bank of America’s profit rises closer to Wells Fargo’s, its market cap should too. 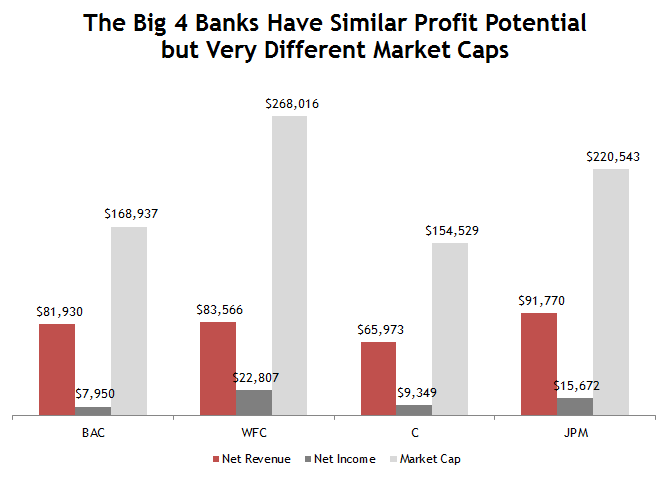