As May approaches, 2013 continues to look like 2010-2012 on repeat, and this has many asking whether or not we can expect a seasonal slump once again.  Even at the Fed’s most recent news conference Bernanke opined on the pattern for spring weakness, and he gave one possible statistical explanation:

Well, you’re absolutely right that there’s been a certain tendency for a spring slump that we’ve seen a few times. One possible explanation for that—besides some freaky things, some weather events and so on, one possible explanation is seasonality. Because of the severity of the recession in 2007 to 2009, the seasonals got distorted. And they may have led—and I say “may” because the statistical experts—many of them deny it, but it’s possible that they led job creation and GDP to be exaggerated to some extent early in the year. Our assessment is, though, that at this point, that we’re far enough away from the recession that those seasonal factors ought to be pretty much washing out by now. So if we do, in fact,see a slump, it would probably be due to real fundamental causes and then we would obviously have to respond to that. As I said, we’re planning to adjust our tools to respond to changes in the outlook, and that can go either direction. 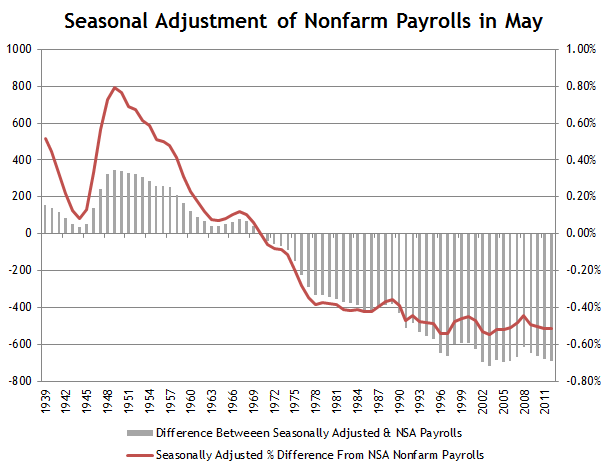