With $AAPL now trading at just a little over $400 per share, the enterprise value of the company (market cap less net cash) has shrunk to levels which value the company at around the same price as three of its most comparable competitors: $GOOG, $MSFT and Samsung.  On a market cap basis, Apple still looks like it’s worth significantly more than its competitors, but that’s mostly because the cash pile is so unfathomably large that it skews the whole market value of the company.

Does Apple the enterprise deserve to be worth less than Google, a company that does 1/3 of it’s revenue?  Only time can tell.  Mathematically though as cash becomes a larger and larger percentage of Apple’s market value, each additional percent decline in the share price means a bigger and bigger discount to the value of Apple’s business.  Apple’s share price is down 6% today, but the enterprise value is down nearly double that. 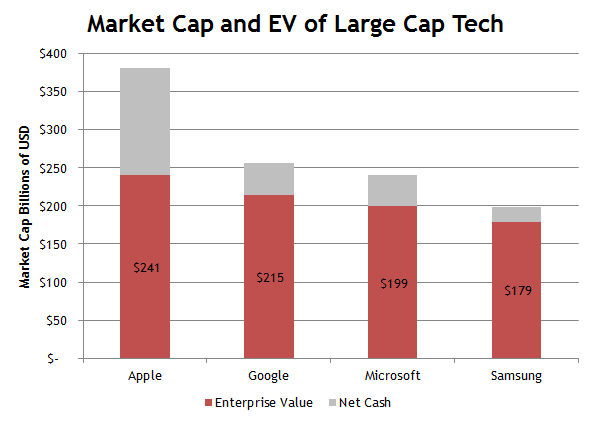