The second estimate of GDP for 2Q11 was reported today and real GDP growth was revised downward to 1.0% from 1.1%.  Optimists will note that although real GDP is still slightly below its 2007 peak, nominal GDP hit a new peak, just under $15 trillion.

Of course, GDP for the past several years has benefited significantly from government stimulus in the form of trillion dollar deficits.  Given the trillions of dollars spent trying to push GDP higher, it’s a sad statement on the efficacy of fiscal policy that adjusted for these deficits, even nominal GDP is still below the 2007 peak.

Of course, no one knows what that line would look like with no stimulus at all, but with chatter growing for new rounds of stimulus, the question has to be asked–what’s it worth? 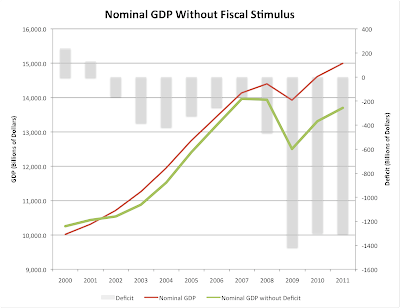