As long as we don’t fall into recession this month, the current economic expansion is now tied for the 6th longest of all time as defined by NBER.  It’s been 58 months since the recession ended in June of 2009.  That’s the same length of time as the post-1974 bear market expansion that ended in 1980.

The five economic expansions that have survived longer than this one have all survived a lot longer.  The next longest expansion was the most recent expansion which started in 2001 and ended in 2007.  I’ve always questioned the dates of that expansion though, since the stock market didn’t bottom until 2003.

The NBER counts 34 expansions since 1854, and 15 of those took place before the Federal Reserve.  If you only count expansions in the Fed era, this expansion has lasted longer than 13 out of 18.

Still, according to the NBER the three most recent expansions all lasted longer than our current one.  So if you believe that we’ve learned how to tame the business cycle in the last 30 years, then it’s possible that this expansion still has a ways to go.  If, however, like me, you’re skeptical that we can really tame the business cycle, then recession could be just around the corner. 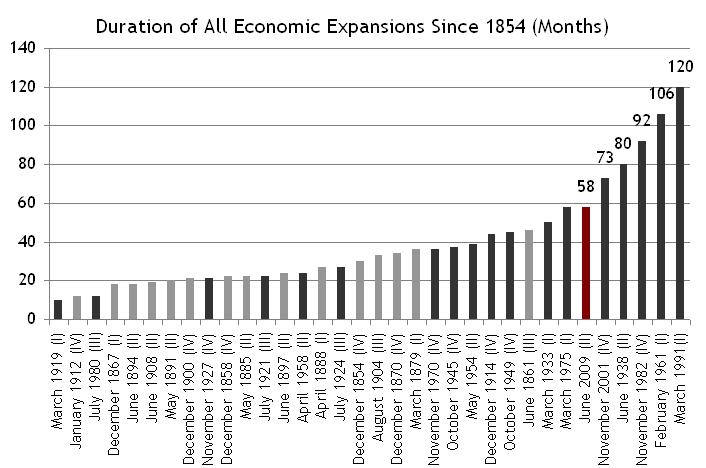