I recently read “The Art of Money Getting,” which was written by PT Barnum in 1880.  Although 132 years old, many of its passages still ring true today.  Below were some highlights worth re-posting.  Overall the quotes paint a picture of a man who would argue that there is no such thing as overnight success.

The S&P 500 is up 15% year to date, but earnings are forecast to grow 3-5% this year, which mathematically means that we’ve experienced some multiple expansion during 2012.  Below is a chart highlighting the multiple expansion for the 10 largest S&P 500 companies so far this year.  Of the 10 largest companies in the S&P 500 (to start the year) only one, XOM, has seen multiple contraction on a TTM basis. 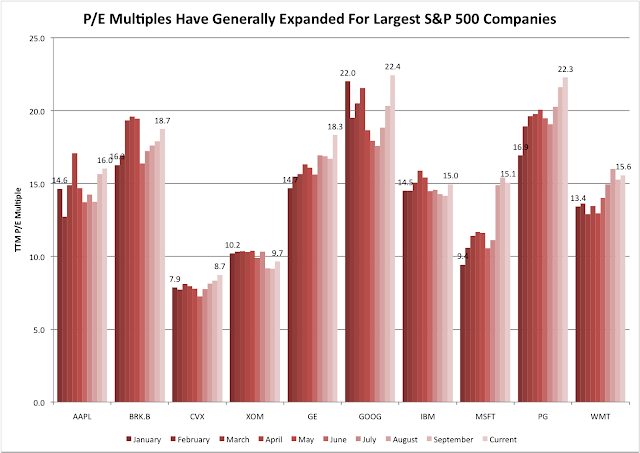 As September is coming to a close, the S&P 500 looks set to post another monthly gain.  However, most of that gain came completely on two trading days: September 6th and 13th when Mario Draghi and Ben Bernanke each announced infinite monetary action.  Without those two days the S&P 500 would be 52 points lower and the chart would look like it does below.

Of course, it’s not really possible to strip away two trading days or the effect of what that news did to prices.  However, the hypothetical chart below does highlight that there have been more down days than up days in September. 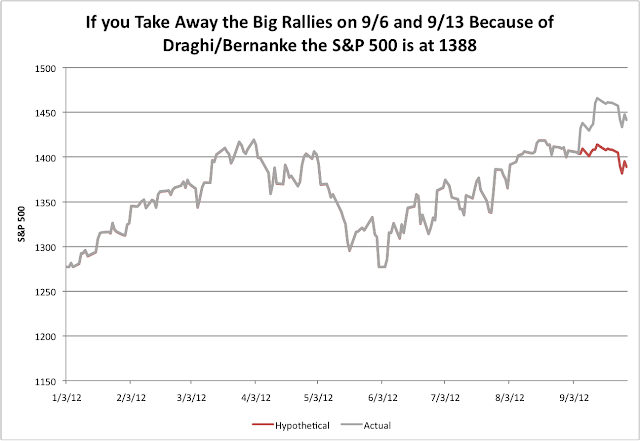 Initial jobless claims were reported today and fell back towards their lowest levels for this cycle at 359k.  The chart looks similar to two other important financial charts: the VIX and High Yield credit spreads.  All three charts show a similar spike in the recession and have gradually declined since (with some bumps along the way).  Now all three are settling at low levels, but slightly higher than their lowest points reached in 2006/2007.  If the S&P 500 is going to extend its rally from here, it would seem dependent on each of these indicators breaking through to lower levels.  Can we get there? 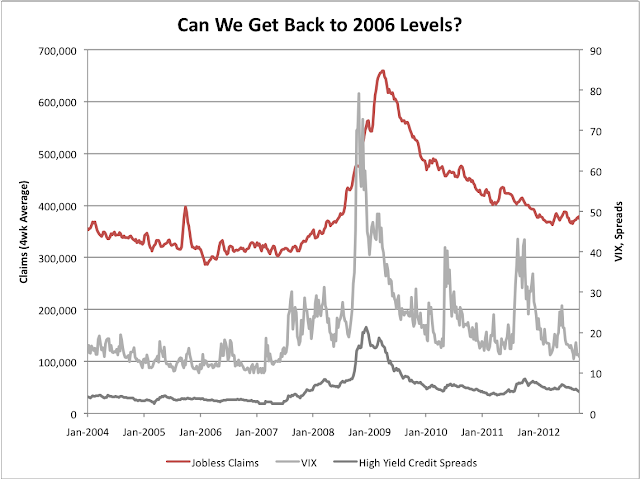 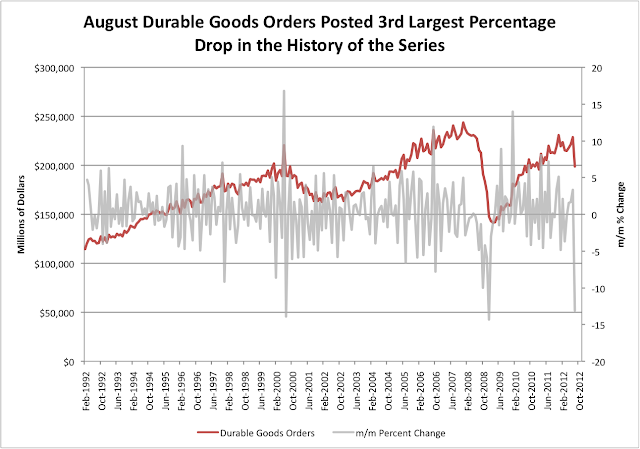 There are only two trading days left until another quarter goes in the books.  Here’s how 3Q12 is shaping up so far compared to other years. 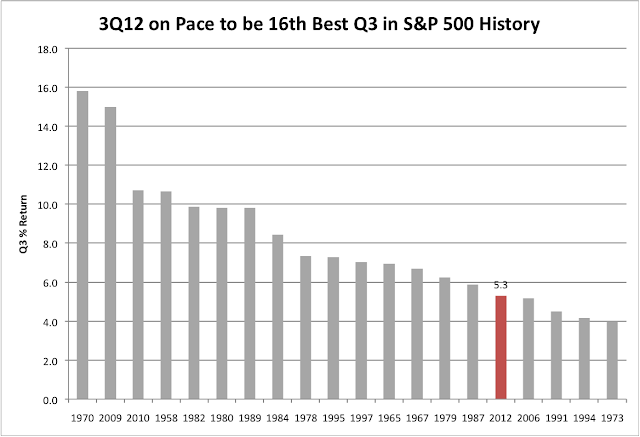 While some in the blogosphere continue to try to push the idea that google trends could be a good election indicator, Intrade has become a popular supplement to traditional polling to help handicap each candidate’s odds of winning.  Recently, Obama’s odds have surged above 70%.

Many in financial markets are comfortable with Intrade as a prediction market presumably because of the pervasive belief that markets are efficient at predicting future events.  Most technicians will argue that you can’t trust prices without volume though, and in the volume department Intrade is still a developing marketplace.

Below is an evolution of the daily dollar volume that trades in Intrade’s most popular contract, the Obama presidency contract.  Volume has risen sharply as the election has gotten closer, but still only averages $1.2m per day in September, which is roughly equivalent to an illiquid microcap stock. 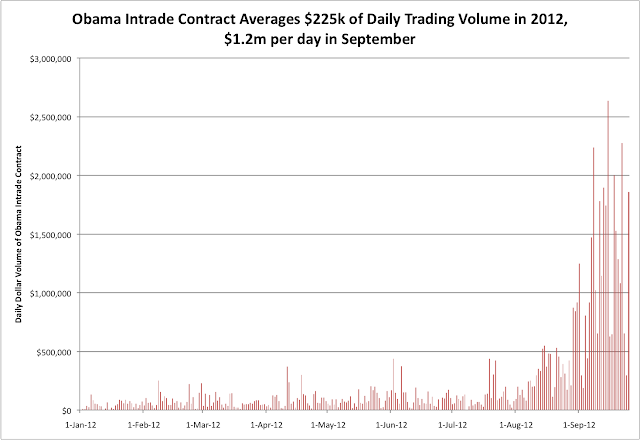 A few weeks ago I posted a hypothesis that Google trends may be a good election indicator, because it is a measure of a candidate’s mindshare.  If that’s true, this election may be somewhat closer than many expect, because the most recent trend reading shows Romney with slightly more search volume than Obama.  The last two elections didn’t have this close of a race in late September.

They also didn’t show news references tick sharply lower.  Is that an indication that there is weak general interest in this election?

I’ve written a few times about what I think about Amazon’s market potential, but the growth that is priced into the stock never ceases to amaze me.  Below is a comparison of some fundamental metrics for Amazon vs. Target.  Amazon does 75% of Target’s revenue and only 58% of Target’s gross profit, but it has a market cap that is 2.7x larger than Target’s.  Amazon has to grow a lot to grow into that valuation. 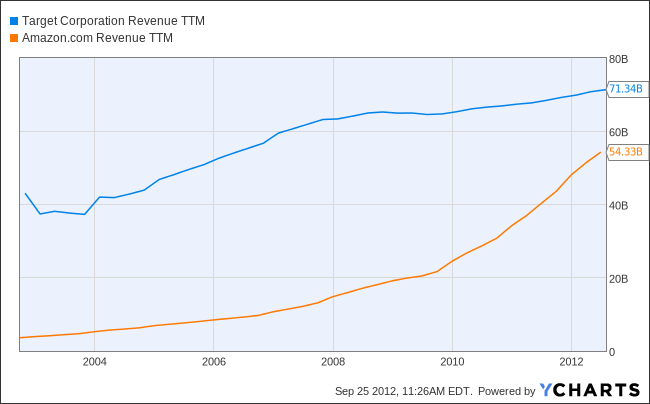 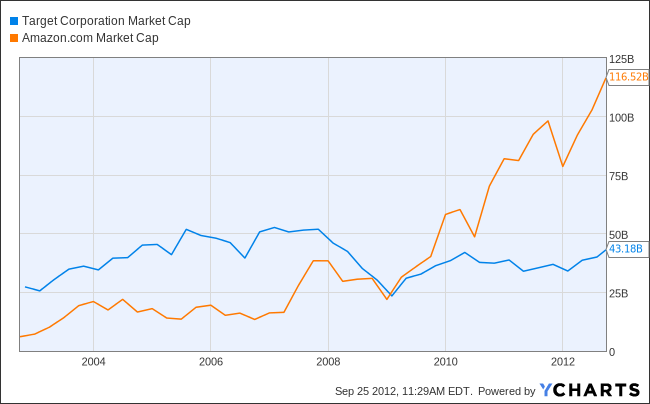 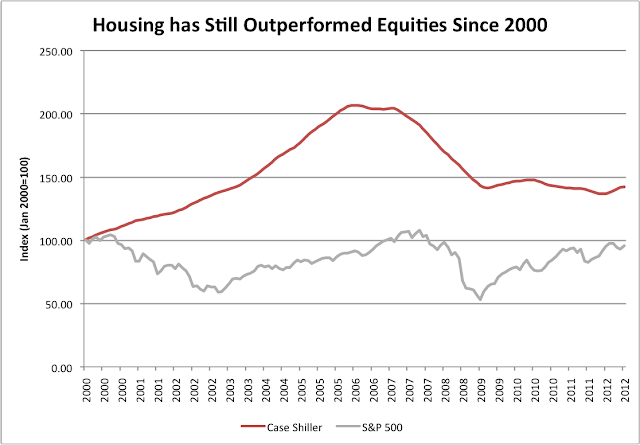