I’m going to be traveling for a bit until after labor day, so this will be my last post until then.  Sorry to leave everyone with a rant, but I think this is an important concept worth pondering.

One of the main reasons that our economy feels so stagnant is that our economic policies are focused on maximizing the wrong economic indicator.  We fixate on GDP growth, when in actuality this is the second derivative of what really matters for economic well being: wealth.

Wealth is most important because wealth is the key determinant of how much one can consume.  Wealth is distinctly different from income.  A person with a high net worth and no income is generally better off than a person with a high income and no net worth.  Income is important because it controls the pace at which wealth growths, but our ultimate economic goal as individuals is maximization of wealth and by extension, consumption.

In an economic sense, GDP is an income measure (even more accurately a revenue measure).  As an income measure, GDP itself (i.e. $15T) is the growth measure.  If all of GDP were saved in a year, wealth would grow by $15T per year.

As a society we follow GDP, but we are even more concerned with GDP growth (for example 3%).  This is mostly misguided because it is the second derivative of what we actually should care about.  GDP growth measures the pace at which the growth of your wealth is growing.  It is an acceleration measure.

In physical terms, wealth, GDP and GDP growth are akin to position, velocity and acceleration.  If you are trying to reach a destination, who cares if you are going fast and headed faster in the wrong direction?

If our intended economic destination is the maximization of wealth, we as a society have been failing miserably.  The charts below measure the aggregate net worth of US households: Assets-Liabilities.  Two major factors are left off of the headline number which are added back into these charts:  1) Federal Government Debt, which Ricardian equivalence argues is a direct liability on the household balance sheet 2) Inflation adjustment.
When one adds government debt and the declining value of the dollar back into the picture, the outcome is bleak.  There has been no increase in real household net worth since 1999.  If one adjusts the chart further for a per capita number it takes real household net worth back to 1997 levels.  Worst of all if we include the very real but unfunded liabilities of Social Security and Medicare (someone has to pay for these programs if not the government), household net worth all but vanishes. 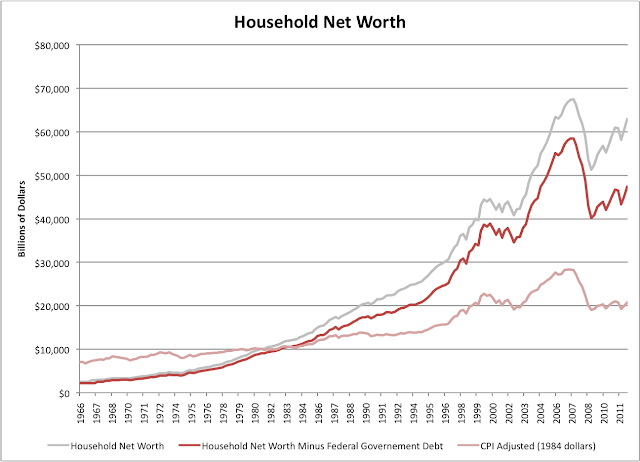 We have been failing to increase wealth because our economic policies have been designed deliberately to destroy it in order to pursue GDP growth.  Low interest rates and large deficits are policies that force more debt and inflation in order to generate GDP growth.  These policies can stoke economic activity, but do so in a way that directly restricts the accumulation of wealth by actively combating what has already been saved.  Negative real interest rates are by definition wealth decaying.  Debt wasted on an unproductive asset is similarly harmful to net worth.  The above chart implies that over the last 12 years these wealth destructive policies have wiped out all of the GDP produced during the period.  Thus our aggregate net worth has remained flat.

Our current policies are the equivalent of declaring economic war on one’s self–like tearing down a perfectly good home in order to rebuild it.  The rebuilding of the home contributes to GDP for the period, but did it make the dweller any better off?  Destroying and rebuilding valuable assets doesn’t increase wealth it destroys it.

Why do we as a society continue to push our foot to the gas pedal trying to go as fast as we can in the wrong direction?  What is the value of producing one more widget per year if we destroy two saved widgets in order to do so?  When will these destructive and misguided economic policies end? Sadly, it probably wont be with any official running for office today.

With growing consensus that the housing market has finally turned from the bottom, home builder Toll Brothers’ stock has seen a huge rally of late.  Year to date TOL is up 62% and its market cap is now $5.5B.  That’s still $3B below its peak in 2005, but housing starts also peaked at over 2 million back then.  Today housing are only 746k. 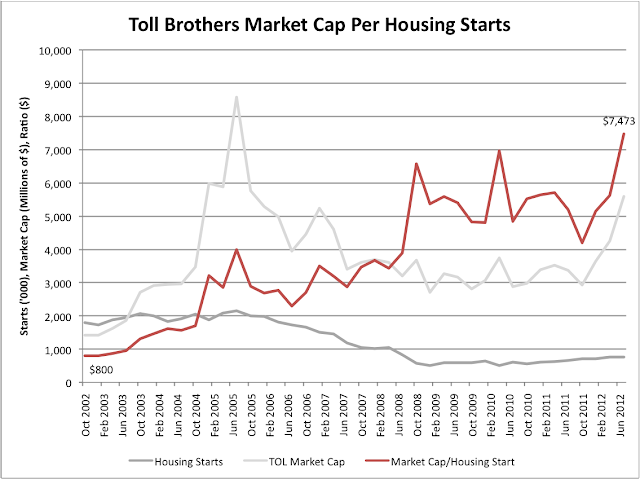 In searching for data on Japan’s trade deficit, I found a headline worth reposting from the Tehran Times.  Sometimes you have to love the humor provided by state controlled media…

Japan has turned to fossil fuel alternatives and increased its energy imports after its nuclear reactors were shut for safety tests following last year’s crisis at a nuclear power plant in Fukushima.

Earlier in the month, former Japanese Prime Minister Yukio Hatoyama told Press TV that his country is paying a high price for the illegal US-led oil sanctions against Iran.

Crude prices have been increasing following the illegal sanctions on Iran’s energy sector and the persisting Israeli publicity campaign of threatening unilateral military strikes against Iran. 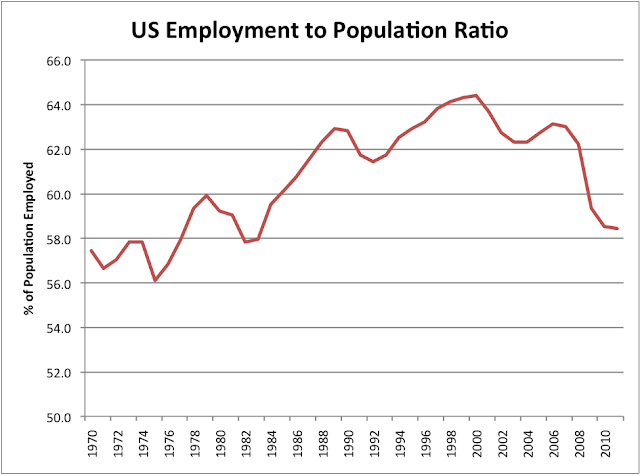 Still, compared to some other developed countries the percentage of the US population that is working is relatively high.  In Italy, less than half the population is employed. 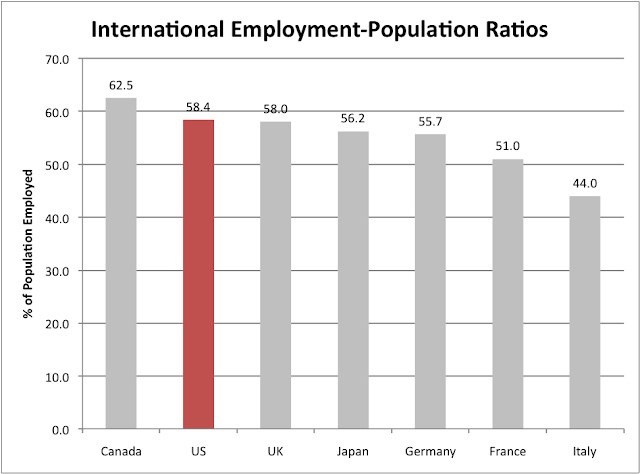 The following is a rant.  If you are easily annoyed by meaningless semantic arguments feel free not to pay attention.
Since Apple became the largest company of all time, “law of large numbers” seems to have become a CNBC buzzword.  It’s clear from the context of the conversations that the term is being used to argue that it’s difficult to continue to grow at a high pace from a large base, but that’s not really what the “law of large numbers” is about.  The law of large numbers is a statistical term that says that the more samples you take of a population, the closer the mean will accurately represent the mean of the population.
From Wikipedia:

In probability theory, the law of large numbers (LLN) is a theorem that describes the result of performing the same experiment a large number of times. According to the law, the average of the results obtained from a large number of trials should be close to the expected value, and will tend to become closer as more trials are performed.

This seems to be a slightly different concept than the idea that “Apple’s market cap can only get so big before it falls.”

Maybe it would be better to specify that Apple could succumb to the “law of large market values.” After all, the limit of Apple’s market cap doesn’t have anything to do with the limits of numerology.  There’s nothing that says that the number 1 billion cant increase to the number 1 trillion or more.  The constraints on Apple’s market cap are driven by the size and penetration of its end markets.  If there were a company that had a monopoly on Oxygen, it’s reasonable to assume that it could have a much higher market capitalization than Apple.

Apple’s intraday bounce off of the $675 level doesn’t have to mean a whole lot, but since the company is now almost 20% of the Nasdaq, I figured it might be worth looking at other times that the stock has had a big intraday reversal like it had today.

Back in April, when the stock had its last relative peak, the  peak came on a day just like today where it traded up in the morning and lower by close.  However, there were two other big reversal days (highlighted below) in February on little news and March when it bounced off of the $600 level.  Neither of those days (like the thousands of days before them) signaled that the stock should be sold. 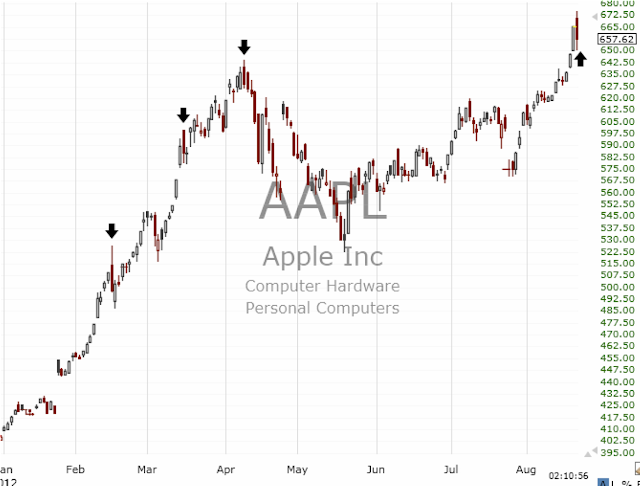 Are bonds always less risky than equities?  If TLT’s recent move teaches investors anything the answer should be an emphatic no.  Earlier this year the S&P 500 saw a drawdown (top to bottom loss) of ~10%.  Over the last month TLT, an ETF matching the return of long term US treasuries, has lost nearly the same amount as interest rates have risen.  The moral of the story:  holding duration on the long end of the curve can create equity like returns and equity like volatility. 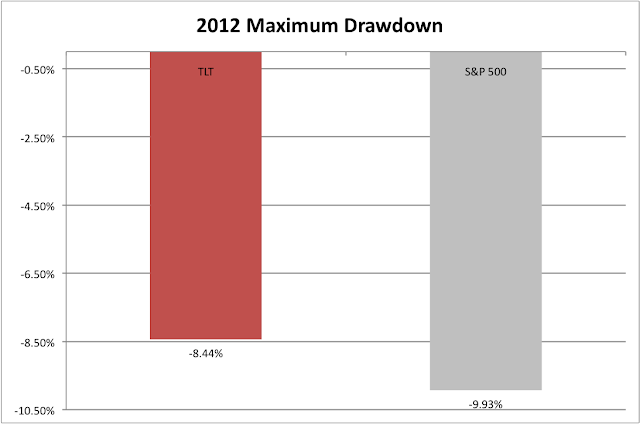 Gold is up more than 1% today, which is the first day in a long time that the metal has had notable outperformance relative to the S&P 500.  While gold has moved sideways for most of the year and is only up 4.5% year to date, we are soon entering a time of year that has historically been pretty favorable  for gold bulls.  The favorable seasonality is said to be driven by the Indian harvest/festival season when farmers spend profits on gold.  India was having drought problems of its own earlier this year, but has since seen a nice recovery in rainfall.  Diwali on. 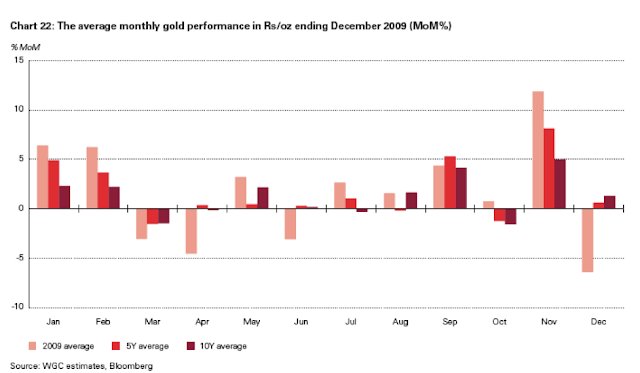 UPDATE: There was an error in the way I annualized the VIX in the original post leading to a different conclusion.  The error should have been corrected below.

The VIX is supposed to forecast the 30 day future volatility of the S&P 500.  Below is a chart of the VIX against a chart of the actual realized volatility 30 days from the time of measurement of the VIX.  On average, the VIX has expected a slightly more volatile environment than has been realized over the last 8 years.  The average difference between the VIX and actual volatility in this period was about 3.25%. 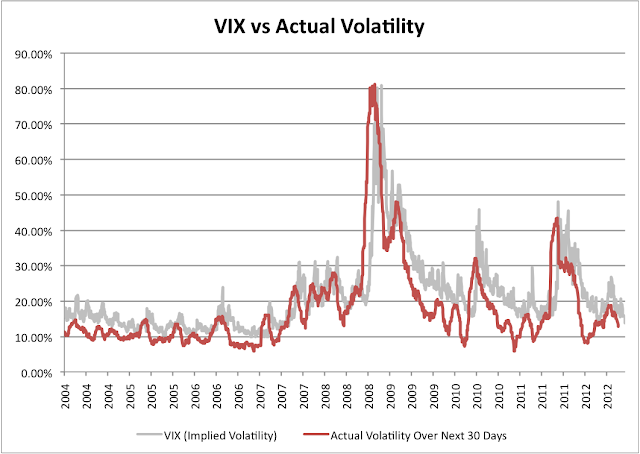 As the VIX has fallen to multi-year lows over the past several trading sessions, the S&P 500 continues to trade in a very narrow daily range.  The average daily (absolute value) change in the S&P 500 is nearing lows of its own at +/- 0.55%.

Although the VIX is supposed to be a forward looking indicator, it is highly correlated with recent history.  It rises and falls in lockstep with what has happened over the previous 30 days. 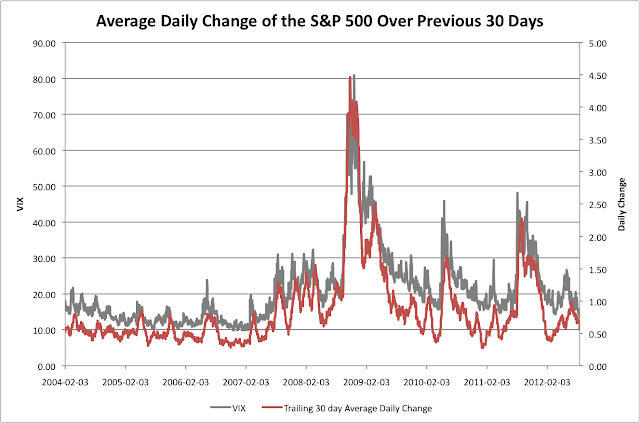