If you had $525B, which would you rather own: AAPL or the nation’s 6 largest financial institutions?  If you sum the market cap of WFC, JPM, C, BAC, GS and MS the number comes out to about the same level as AAPL by itself.  If you owned those 6 banks, you would control $4 Trillion in deposits or about half of all US bank deposits.  You would also control about $10 Trillion in assets–equal to 2/3 of US GDP. 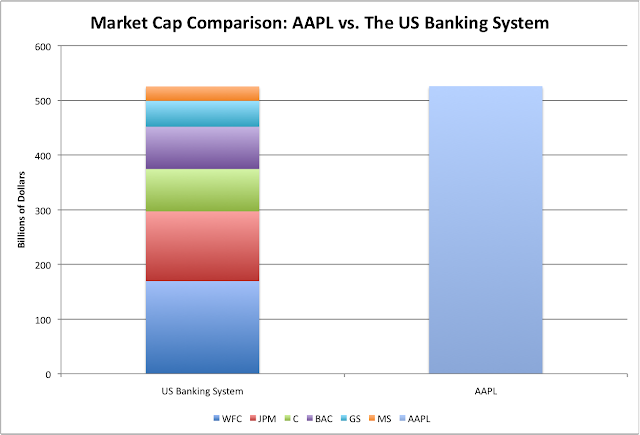 An all time low on 10 year US interest rates still looks like a nice spread vs. JGB’s.  Japanese government bonds sport a yield less than 1%.  The spread between the US 10 year and Japanese 10 year is the lowest it’s been since 1990. 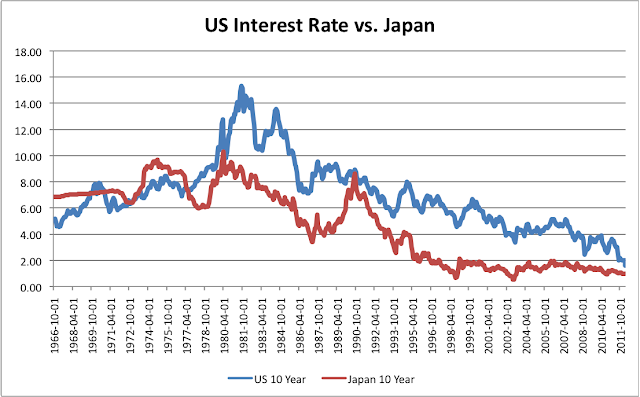 Because Oil is a commodity that is typically priced in dollars, Americans have benefitted from a declining price of crude  in recent weeks as the dollar has risen against the Euro.  WTI crude especially (which is the most frequently quoted price of crude in the US) has fallen below 90.

On the flip side, the Europeans have been hit by a double whammy when it comes to crude prices.  Not only has Brent (a more appropriate European price proxy) traded at a significant spread to WTI, but also the weakening Euro has meant that Europeans need to pay more for a barrel of oil.  In fact, the price of oil hit an all time high in March in Euro terms and has fallen by less than it has in the US in recent weeks.  WTI priced in dollars is down by 16.5% while Brent priced in Euros is only down 11%. 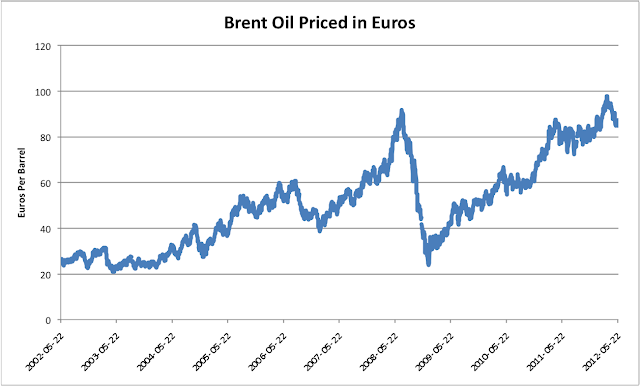 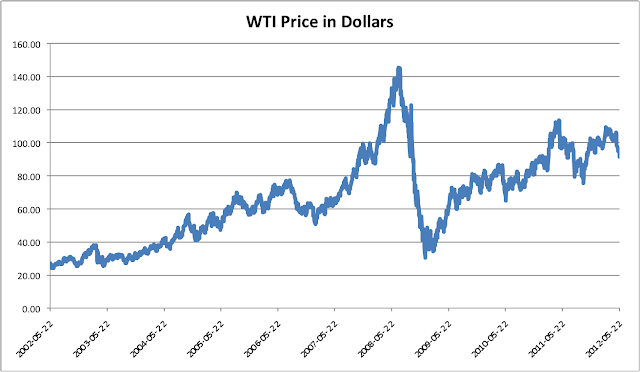 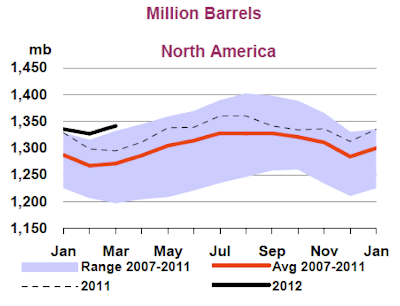 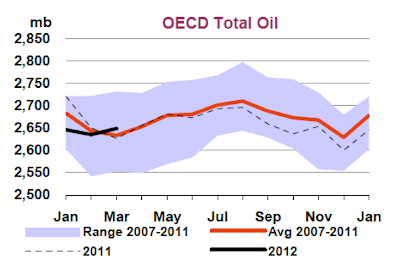 I’m currently reading a book written in 1973 by Charles Ellis called The Second Crash which is a semi-fictional account of the aftermath of a 1970 stock market crash.  What’s amazing about the book is that for everything you might think would have changed since 1973, much of the language resonates just as strongly today.  Below is a great passage about the culture on Wall Street.  The speaker is a fictional fortune 500 executive:

“What a bunch of jerks those guys are.  The only thing that counts in Wall Street is money.  Money, money, money, money.  There’s no reality in that business–everything is for sale.  And for sale all day long.  Maybe you can’t really blame them for losing touch.  I mean if you think you can buy and sell General Motors any time of any day–and that’s exactly what they think they’re doing when they trade a few blocks of GM stock–maybe you learn to have a case of Megalomania.  Maybe you just can’t help it.  Or maybe you have to con yourself so you can live with the fact that you’re getting rich doing damned near nothing.  Does anybody really believe that trading stocks back and forth really matters all that much?

Every time I go to Vegas I think of Wall Street.  They’re almost exactly the same.  Think about it.  Big money is on the line all the time.  The action is continuous.  The little guy comes in for thrills which the fat cats provide him because they need to finance their overhead.  But the real action happens out in the back rooms where it’s quiet and everybody plays table stakes.  Out front in the casino they’ve got croupiers and dealers who are just like brokers in a classy boardroom.  The noise is even the same–the slots sound just like the automated quote boards and there’s that constant hum of people parting with their money.  The words are so much alike you have to look carefully to be sure you know where you are–“double up,” “let winners run,” “you’re covered,” “I’m short,” “I’m hot,” and all that.  But in both places the only way to really understand what’s going on and why is by getting to know the principals.  Both groups are interesting.  Both groups are good at the same thing.  They’re good killers.”

Bankia currently finds itself at the center of the Eurozone firestorm as the top bailout candidate in Spain.  Below are some important metrics for the bank from the most recent (english) financial statements posted on its website.  While the NPA ratio is quite high at 7%, what’s interesting about Bankia is that compared to many European banks, its tangible equity ratio is actually quite high at above 5%.  Most European banks rely on lower risk weighted assets to achieve high tier 1 ratios.  Bankia also seems to be more substantially deposit funded than many of its larger European peers, which is generally a positive attribute. 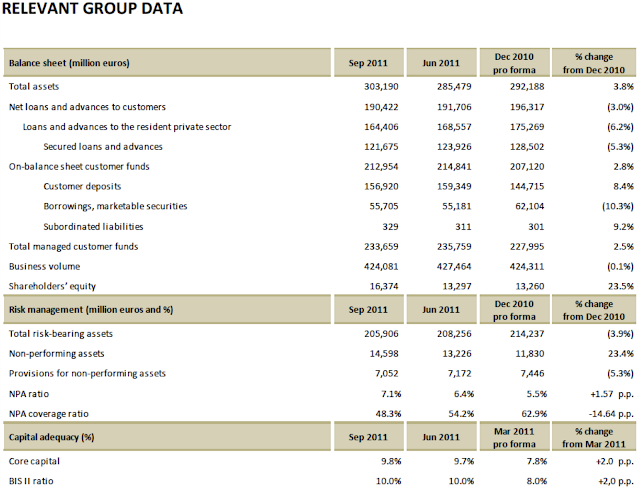 While the S&P 500 continues to trade like 2012 is a repeat of 2011 and 2010, a subtle difference can be gleaned from google search data.  On google, there’s less interest in recession, and specifically fewer searches and news references of “double dip.”  Have we finally gotten far enough away from 2009 that people wouldn’t classify a hypothetical recession as a double dip? 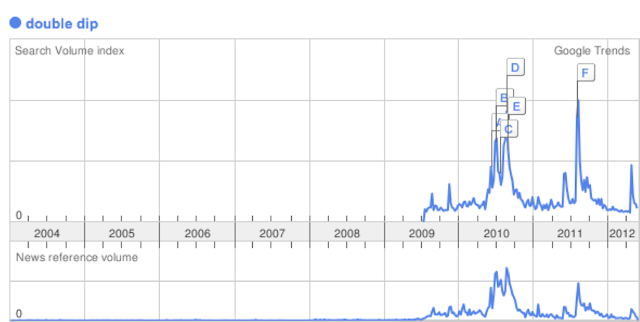 As talk of a Greek exit from the Euro continues to gain steam, it’s worth noting that it’s not so easy to force a country to stop using a currency.  There are many examples of “dollarized” economies, countries that adopt a foreign currency as legal tender.  In fact there are six countries in Europe that are not EU members that use the currency as a primary unit of account.  While four of these countries have formal agreements to do so, two do not yet continue to use the Euro.  From Wikipedia:

The euro is also used in countries outside the EU. Three states—Monaco, San Marino, and Vatican City—[15][16] have signed formal agreements with the EU to use the euro and mint their own coins. Nevertheless, they are not considered part of the eurozone by the ECB and do not have a seat in the ECB or Euro Group. Andorra reached a monetary agreement with the EU in June 2011 which will allow it to use the euro as its official currency when ratified. Under the agreement it is intended that Andorra should gain the right to mint its own euro coins as of 1 July 2013, provided that Andorra implements relevant EU legislation.[17]
Some states (viz. Kosovo,[note 7] and Montenegro) officially adopted the euro as their sole currency without an agreement and, therefore, have no issuing rights. These states are not considered part of the eurozone by the ECB. However, in some usage, the term eurozone is applied to all territories that have adopted the euro as their sole currency.[18][19][20] Further unilateral adoption of the euro (euroisation), by both non-euro EU and non-EU members, is opposed by the ECB and EU.[21]

To complicate the picture a little more, international economic relationships in Europe don’t start and stop with the EU and the Eurozone.  For a look at the landscape, a diagram is below: 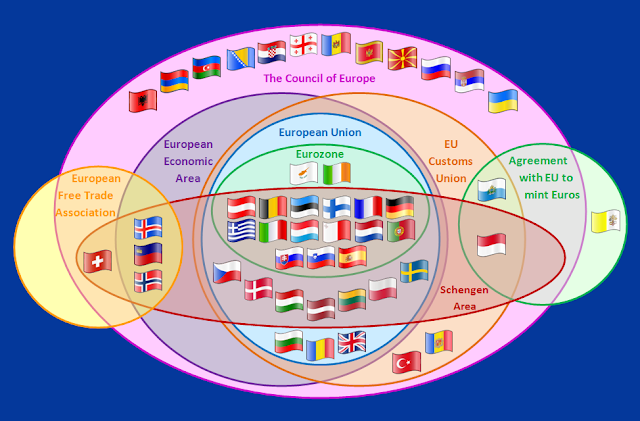 A little under halfway through the year, many are talking about the fact that 2012 is starting to look a lot like 2011 and 2010.  For a look at just how closely we’re tracking the last two years, below are the annual charts of 2010-2012 plotted on the same chart.  The graph is indexed so that January 1=100 for better comparability. 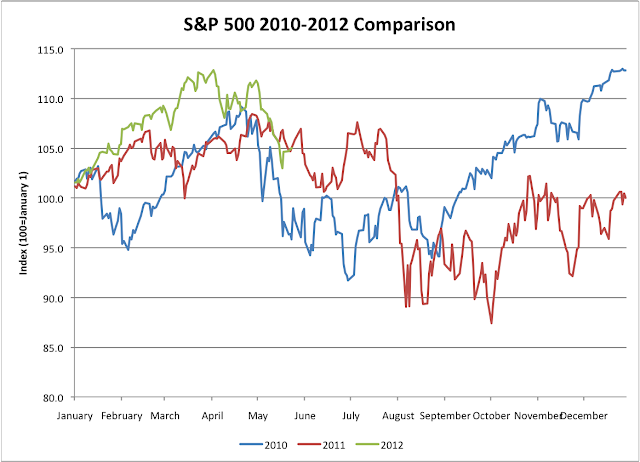